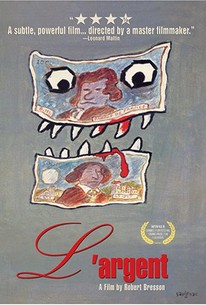 The last film by veteran writer/director Robert Bresson, the French crime drama L'Argent (Money) was based on a short story by Russian novelist Leo Tolstoy. Looking for some quick cash, young man Norbert (Marc Ernest Fourneau) gets a phony 500 franc note from his friend Matrial (Bruno Lapeyre). After he spends it at a photography shop, the unscrupulous shop owner (Didier Baussy) decides to pass it on to someone else. The unfortunate victim is honest delivery man Yvon Targe (Christian Patey), who doesn't realize the bill is a fake. When he tries to buy some food with it, he is arrested. He tries to sue the photographer, but shop assistant Lucien (Vincent Risterucci) has been bribed to stay quiet about the transaction. The scandal causes Yvon to lose his job. In order to support his family, he tries driving a getaway car for some criminals. Unfortunately, their heist doesn't go so well, and he is sent to prison for three years. While incarcerated, his child dies of diphtheria and his wife (Caroline Lang) leaves him. Crazed, Yvon turns to theft, violent crime, and eventually cold-blooded murder. L'Argent earned (Bresson) the Director's Prize at the 1983 Cannes Film Festival. ~ Andrea LeVasseur, Rovi

Michel Briguet
as The Woman's Father

Its pleasures are the classic pleasures of the art film -- niceties of technique, juxtapositions of image and sound, a judiciousness in choosing what is shown, and what isn't.

Bresson, working his sound track as assiduously as his visuals, once again makes us realize how little use most films make of the resources of the cinema. A masterpiece.

A harrowing scour of ideological cinema.

Bresson -- who was eighty-two years old when the film came out, and clearly in no mood for mellowing -- frames the acts of wickedness, both great and small, with a terrifying calm.

This is a return to the extremes of crime and punishment that Bresson last used in Pickpocket; and as in that film, crime is a model of redemption and prison a metaphor for the soul.

The film, in its rigor, economy and intensity, has a kind of brilliance. As always with Bresson, one is in the presence of moral and artistic seriousness of the highest order.

Bresson's icy stare shows a life sunken into despair and misanthropy, suggesting L'Argent is only funny in a rich man's world.

L'Argent is one of the most damning litanies of human evil one may encounter. It's also one of the better films.

Harrowing crime film about the persecution of a working class man by the rich.

You are reading in a large campus library. Your ear picks up a sound. In the distance, someone in dress shoes walks toward your section. Her heels coldly resonate on the tiled floor. Click, click, click, click. The sound grows louder as she nears. Click, click, click, click. Distracted, you lift your eyes and frown. She finally passes, unaware of your irritation. Her steps fade slowly -- too slowly -- as she continues onward behind your back. Until "L'Argent" mercifully switches to a rural setting near the end, the entire film is like this. Torture. You've never heard so many footsteps as characters numbly, silently tread through various rooms and hallways. But the aggravation doesn't stop there. The cast's body language is so bloodless and repressed that your mind may scream at director Robert Bresson to just let his actors be human. Observe the unnatural hand movements. The stiff postures. Even a brief scene where a clerk completes a camera sale turns exasperating. It's shot as if he's a magician doing card tricks. This and Woody Allen's "Husbands and Wives" (neurotic shaky-cam) are the only two films I've ever seen that actually gave me a headache. Based on a Tolstoy short story, "L'Argent" shows how money corrupts via the impact of a single counterfeit bill. Two schoolboys buy a trivial picture frame, only because they want change for a forged, 500-franc note. The naive shopkeeper is later berated by her husband for accepting the money, but she points out that he took two phony bills the day before. Literally passing the buck, he unloads all three bills on a delivery man, Yvon (Christian Patey, just one of the cast's unknown, seemingly untrained actors). When Yvon innocently tries to pay for lunch with the money, the waiter calls the police. Yvon is arrested. He avoids prison but loses his job. This sends him into a downward spiral of crime that costs him both his freedom and family. Bresson's mimimalist style does have its intrigue. As with some of his other films, there is no musical score. Perfunctory behavior is dwelled upon, while crucial action occurs off-camera. The film is over well within 90 minutes. Its brisk, clinical pace is remarkably distinct. But at what price? Is a movie successful when a tragic story breeds no empathy whatsoever with its characters?

Two young men pass a counterfeit bill off to a photo shop, who then (knowingly) passes it off to a delivery man. This starts a chain of events during which the delivery man's life spirals right into the toilet, culminating in his commission of a horrific act. It took me two viewings to finally get what was going on. The first time I watched this film, I couldn't quite follow the story, due to Robert Bresson's directorial style. It can best be described as "yada yada". He tends to leave out the boring bits -- exposition and such -- and just shows us the meaty parts. It reminds me of someone showing me photos of their vacation. A video would give a fuller picture the trip, while the photos only hit the highlights. Bresson also uses non-professionals as actors -- I'm told he called them "models" and directed them to speak in a somewhat monotone pattern, and then it was up to the audience to gleen the emotion from the scenes, based on the dialogue and direction.That can at times make the acting seem wooden and formal, but it some ways it actually works. Anyway, the 2nd time around (and after viewing another Bresson film and getting a feel for his style), everything was more clear. Can't say I ENJOYED the film -- it's a crime/murder drama -- but I don't feel like I wasted the couple of hours (x 2) that I spent watching it.