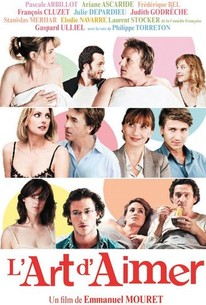 A handful of couples find themselves struggling with the tricky business of love and sex in this romantic comedy-drama from French writer/director Emmanuel Mouret. Emmanuelle (Ariane Ascaride) and Paul (Philippe Magnan) have been happily married for years, but she's found that her sensual appetite has been growing while his is shrinking, and she wonders if she should take a lover. Aging Achille (Francois Cluzet) is lonely and looking for love, and imagines his dreams have come true when his attractive neighbor (Frederique Bel) shows up at his door wearing something slinky. But is she aware of the message she's sending to him? Isabelle (Julie Depardieu) has been going through a dry spell in her love life, and her friends are offering to help in unexpected ways -- Zoe (Pascale Arbillot) is willing to let Isabelle have an affair with her spouse, while Amelie (Judith Godreche), who isn't sexually attracted to her new boyfriend Boris (Laurent Stocker), would like Isabelle to take over for her in the bedroom. And William (Gaspard Ulliel) and Vanessa (Elodie Navarre) love each other, but both are wondering if the other is being faithful. L'art d'aimer (aka The Art Of Love received its North American premiere at the 2011 Montreal World Film Festival.

Stanislas Merhar
as Laurent
View All

There are no critic reviews yet for L'art D'aimer. Keep checking Rotten Tomatoes for updates!

Cute little French story about several couples who are vaguely linked. Enjoyed this a lot, even though I often don't like this style. Some interesting situations - the couple who consider an open relationship, the man in love with his married best friend, and the man with the sexy neighbour. Despite the slightly controversial themes, this is just a nice little movie with a likeable cast.