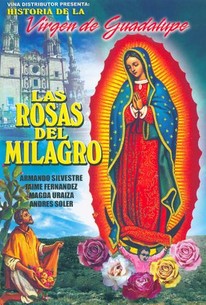 This is a well-made religious film on the miraculous appearances of the Virgin of Guadelupe to a converted Aztec, Juan Diego, in 1531. The Aztecs had a temple constructed to the Earth Mother, Tonantzin on Tepeyac Hill when the Spaniards razed it to the ground as a part of their campaign to destroy the native religion. Six years after Quauhtlatoatzin was baptized with the name Juan Diego (played by Jorge Martinez de Hoyos), he was on Tepeyac Hill when a vision of Tonantzin/the Virgin of Guadelupe appeared to him, asking him to construct a church on the site. (Recent excavations show that this world-famous basilica is built over ancient ruins.) The Bishop refused to believe him. So on her fourth and last appearance to Juan Diego, the Virgin told him to gather some roses growing there (roses never grew on the hill, were foreign to this region), wrap them up in his cloak, and take them to the Bishop. When he did so, the roses came tumbling out of the cloak to reveal an imprint of the Virgin on the material. The cloak and its image are still on display in the Basilica today.

There are no critic reviews yet for Las Rosas del Milagro. Keep checking Rotten Tomatoes for updates!

There are no featured reviews for Las Rosas del Milagro at this time.