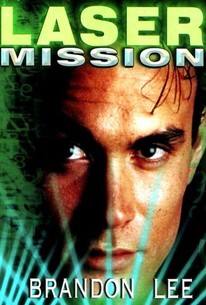 In this action adventure tale, Professor Braun (Ernest Borgnine), an expert in weapons technology, is kidnapped by Soviet terrorists who intend to force him to make a high-tech laser cannon for them. Intelligence agents Michael Gold (Brandon Lee) and Alissa (Debi A. Monahan) are sent in by the CIA to rescue him and recover a cache of stolen diamonds before it's too late for Braun and the world at large. Laser Mission marked Brandon Lee's first starring role in a U.S. feature film, three years before his tragic death while shooting The Crow.

Debi A. Monahan
as Alissa

There are no critic reviews yet for Laser Mission. Keep checking Rotten Tomatoes for updates!

A defecting Russian scientist is kidnapped in Africa because he can make nuclear weapons out of lasers and diamonds; his busty daughter accompanies a secret agent on a rescue mission. Featuring ludicrous action scenes, hackneyed dialogue, and an embarrassed Ernest Borgnine, this ROMANCING THE STONE clone is for connoisseurs of 80s vintage cheese only.

Wow what an explosive movie one minute, and what a cheesy one the next!~

Brandon Lee and his explosive action-packed adventure film is average, but I just wanted to watch this because it's the memories of the late legend Brandon Lee known as Bruce Lee's son.