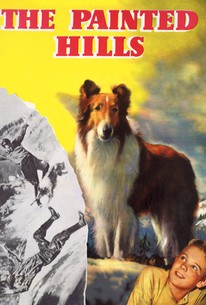 Alexander Hull's novel Shep of the Painted Hills was refashioned into a traditional Lassie vehicle by screenwriter True Boardman. The noble collie turns avenger this time out, hoping to bring the murderer of her master to justice. The perpetrator, played by Bruce Cowling, is hounded (no pun intended) into meeting a fate similar to the one he meted out to the victim. Filmed on a somewhat lower budget than previous Lassie endeavors, The Painted Hills benefits greatly from its all-character-actor cast, headed by Paul Kelly and Ann Doran. The film was lensed in Technicolor, making it a valuable commodity in the formative days of locally-produced color TV in the late 1950s-early 1960s.

Lassie the Dog
as Shep

I've never seen a dog commit a revenge murder before - it was interesting, although not the best movie.