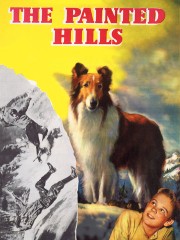 Andy F
August 23, 2017
It turns out that The Treasure of the Sierra Madre wouldn't have been as good if they replaced one of the characters with Lassie.

Wes S
½ November 26, 2014
The plot is intriguing enough, but there's a lot of corny moments, particularly towards the end. Obviously the dog is the best part, but the rest of the characters work well. The film can't get pass its slow moments and sad bits though.

Randy P
January 4, 2014
It may be old, but it's just to cheesy and cliched to even be watchable.

Super Reviewer
Sarah P
April 21, 2012
I've never seen a dog commit a revenge murder before - it was interesting, although not the best movie.

Jeff B
August 23, 2011
Boring Lassie movie with a kind of brutal end. A decent, if unusual, MST3K episode.

monsieur r
½ February 1, 2011
Ok, this film is breath taking? Pleeeeeease. Well, maybe its pretty good, being shot in Oregon no less, my favorite state of the union. The scenery is great, in the snow covered mountains of the northwest U.S.

Here Lassie takes to the mountains. Features more shots of Lassie than most. Set in the 1870's. MGM shot this one which means it can't be all that bad. Worth your time, once at least. 1 hour ten minutes. Color. 1951 per vhs jacket cover info.

I can't lie to you, this film was a bit hard to sit through. The acting is pretty basic from everyone but Lassie, who literally steals every scene. Maybe its supposed to be that way. That dog was damn talented and if it didn't recieve some sort of Oscar for canine legend..... well, it should have.

1 The Painted Hills was the seventh, and final, MGM Lassie film released.

2 Lassie is a stage name for several dog actors. The fictional character was created by Eric Knight in a short story expanded to novel length called Lassie Come-Home.

Published in 1940, the novel was filmed by MGM in 1943 as Lassie Come Home with a talented dog named Pal playing Lassie. Pal then appeared with the stage name "Lassie" in six other MGM feature films through 1951.

Pal's owner and trainer Rudd Weatherwax then acquired the Lassie name and trademark from MGM and appeared with Pal (as "Lassie") at rodeos, fairs, and similar events across America in the early 1950s.

In 1954, the long running, Emmy winning television series Lassie debuted, and, over the next 19 years, a succession of Pal's descendants appeared on the series.

Christopher S
½ February 15, 2009
It's a bit disconcerting to see Lassie cause someone's death, but, all in all, a good bit of drama.

Emily K
January 21, 2009
Very enticing and suspenseful climax at the end. I was quite surprised, and glad about that, since it's not everyday you get that kind of plot in a Lassie movie. The movie has that typical "'50's" touch, but in its time I'm sure it would've been considered a four-star, if not five, film. So that's exactly what I'm giving it.
I would certainly recommend this movie if you're a fan of Lassie, however the dog in this movie is called "Shep", instead of "Lassie", but it doesn't take away from the IDEA of it being Lassie much.

Ruby D
November 27, 2008
I believe that I have probably seen all the Lassie movies ever put out. Lassie movies are by far my most favorite movie. It is a clean, safe movie for family, friends and children.

James H
December 18, 2006
Sappy dog film, starring Lassie. Hokey and not very good, poorly acted. I am just not into this kind of film.

Timothy M
March 14, 2006
Lassie plays Shep, a dog out for revenge. Strange to see Lassie savaging a guy multiple times, then pushing him off a cliff, but at least it's entertaining.
Page 1 of 1