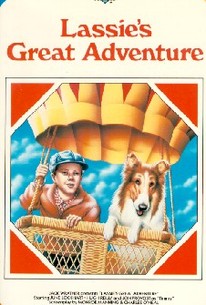 Lassie's Great Adventure is the feature-film version of a three-episode cliffhanger, originally presented on the Lassie television series. It all begins when the faithful collie accompanies his master Timmy (Jon Provost) to the market. While nosing around the vegetables, Lassie wanders into a van, which is promptly locked up. By the time she makes her escape, Lassie is hundreds of miles from home. Meanwhile, Timmy never gives up hope that his beloved Lassie will eventually return. Written by Sumner Long, Lassie's Great Adventure (original title: Lassie's Odyssey) was first telecast February 18, 24, and March 4, 1962.

Lassie the Dog
as Lassie

Will J. White
as Constable MacDonald

There are no critic reviews yet for Lassie's Great Adventure. Keep checking Rotten Tomatoes for updates!

There are no featured audience reviews yet. Click the link below to see what others say about Lassie's Great Adventure!