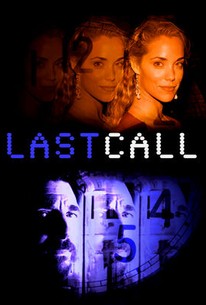 Set in an apartment block in Santiago, Chile, Last Call follows three separate stories about three different sets of characters. Nico (Eric Michael Cole) is watching his brother's apartment while he's out of town on a photography assignment when his brother's significant other comes by, drunk and not interested in taking no for an answer. Elsewhere, a model named Helena (Elizabeth Berkley) finds herself held hostage by a stranger with a thick accent (Bastian Bodenhofer). And a shady salesman (Peter Coyote) is holed up in the basement, trying to arrange some sort of transaction with a pair of visitors from America (Elizabeth Rossa and Garrett Dillahunt). Last Call received its American premiere at the 1999 Hollywood Film Festival. ~ Mark Deming, Rovi

Lorene Prieto
as Cote
View All

There are no critic reviews yet for Last Call. Keep checking Rotten Tomatoes for updates!

There are no featured reviews for Last Call at this time.