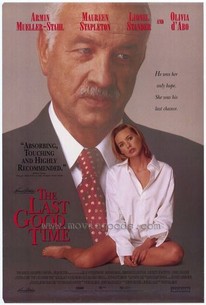 An elderly retired violinist befriends a troubled young woman in this touching, sensitively performed drama. Armin Mueller-Stahl stars as Joseph Kopple, a former professional musician who has withdrawn into a quiet life after the death of his wife. Remaining mostly isolated, Kopple stays at home, playing his violin in the evenings for entertainment. This routine is disrupted, however, when he witnesses a violent fight between his neighbor, Eddie (Adrian Pasdar), and his girlfriend Charlotte (Olivia d'Abo). Kopple takes an interest in the young woman, eventually taking her in when he learns that she has no place to stay. The gentle Kopple possesses a traditional, European restraint, while Charlotte is tough and jaded. Nevertheless, the two soon become close companions, sharing their pain and finding unexpected solace in each other. Director Bob Balaban uses his acting background to draw strong performances from his cast, particularly Mueller-Stahl, whose sensitive portrayal of Kopple proves the film's greatest asset. Despite the potentially sentimental subject matter, these performances ensure that the film presents a believably complex and affecting portrayal of the feelings surrounding old age.

Armin Mueller-Stahl delivers a riveting performance in Balaban's sensitive, well-observed dramedy about an old man whose life changes dramatically after a fateful encounter with a much younger woman.

The movie is worth seeing, I think, for Mueller-Stahl, and for the blunt, outspoken charm of Lionel Stander.

There are no featured reviews for The Last Good Time at this time.