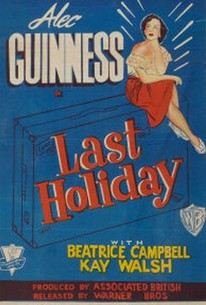 Informed that he has only a short time to live, salesman Alec Guinness decides to enjoy his last months to the fullest. He withdraws all his savings from the bank and heads to a posh hotel. Here he makes more contacts and opens more professional doors than he'd ever done before, thanks to his willingness--at long last--to take risks. He also spends every penny that he's earned in life. Then he discovers that the doctor's diagnosis was in error, and that he's in no danger of imminent death. An ironic ending caps this fast-paced black comedy. Last Holiday was co-written and co-produced by J. B. Priestly, author of many other "if I had to do it all over again" pieces, notably An Inspector Calls. ~ Hal Erickson, Rovi

Brian Worth
as Derek Rockingham

Heather Wilde
as Michael the Waiter

Leslie Weston
as William the Waiter

Harry Hutchinson
as Michael the Waiter

Arthur Howard
as Burden
View All

Alec Guinness is one of classic cinema's truly genuine curiosities.

The picture is surprisingly moving, delicately handled and full of lovely vignettes.

Simple and modest in structure but delightfully rich in character.

Funny, if you don't concentrate.

Slight and mildly amusing dark comedy of rebirth and regret.

It's funny, touching, perceptive and one of the great undiscovered movies. Discover it.

Alec Guinness leads a cast of familiar English characters in this short story about a dying man's last fling at life that's as cozy and predictable as a drink after work at your favorite watering hole.

This is a cool movie, it's sort of a dark comedy at times, and a drama at other times. The story is good and the actors are good. I liked this movie, and I recommend watching it.

im blown away that there are people that dont love this film. rules of the game may be known as the best commentary on high society, but dare i say it, i like this film better. guinness was incredible in the lead role, and every actor played their roles perfectly. the emotional roller-coaster that we receive is not melo-dramamtic, its far more subtle and intentional, and the message of the film carries major weight. a must see.

The solid tragic comedy tells the Dickenesque story of a man's second spring in life as he discovers that he suffers from a fatal illness. A good performance by the late Alec Guiness makes this movie enjoyable above average. Yet, the movie suffers from a slow pace, an uninspired direction and a very weak supporting cast. Still, it is worth a watch if you are into Alec Guiness.