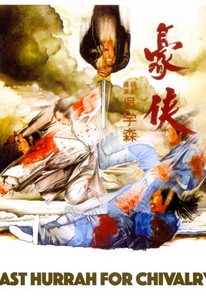 This 1978 martial arts film by director John Woo was wrapped nearly 20 years before 1997's Face/Off would bring him mainstream acceptance in Hollywood. His star was rising already in this routine story enhanced by his characteristic signature: dazzling fight sequences, flawed heroes, and well-placed comedy that releases tension. The narrative itself is a tale of a son (Damian Lau) who sets out to avenge his father but cannot manage alone. He seeks the help of some swordsmen, one of whom tends to doze off during a fight.

"Last Hurrah for Chivalry" is a great sample of traditional HK martial arts film, but John Woo's additions in narrative, implementation, and overall style make it a rather unique entry in the category

Woo instills Chang Cheh's tutelage with his own obsessions, and ushers action cinema into the new decade

The half-dozen great set pieces (including one in a room full of candles) make this one worth a try, at least for fans.

Early stuff from Woo, already showing the themes common in his future films, friendship and loyalty. Five Venoms star Wei Bai (the snake) plays the main lead while Damian Lau plays a cool drinking swordsman. The second half stretches a bit too much, and the fights seems to get too redundant. Still, a very decent option for any HK aficionado.