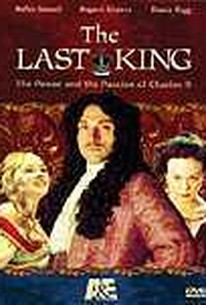 When the forces of the English Revolution unseated -- and beheaded -- his father, Charles II fled to the Netherlands, only to reclaim the throne and usher in an era of prosperity years later. This BBC miniseries -- aired stateside on A&E -- focuses on those later years, as the hedonistic Charles (Rufus Sewell) takes control of the United Kingdom, leads its people through plague and civil unrest, and -- amidst Protestant outcries -- ousts his Catholic brother James as heir to the throne. Meanwhile, his duplicitous mistress Barbara (Helen McCrory) works her machinations behind the scenes, scheming for her cousin George (Rupert Graves) to ascend the throne. The Last King: The Power and Passion of Charles II also stars Shirley Henderson as Charles' long-suffering wife, Catherine. ~ Michael Hastings, Rovi

Critic Reviews for Last King: The Power And Passion Of Charles Ii, The

There are no critic reviews yet for Last King: The Power And Passion Of Charles Ii, The. Keep checking Rotten Tomatoes for updates!

Audience Reviews for Last King: The Power And Passion Of Charles Ii, The

The pomp and political circumstances of the bawdy English royal court occupy one's tediously dull life until the time one finds the time (and one seldom fails to do so) to find young wenches to skewer on the growing royal heritage ... and that's about it for this ofttimes slow moving biopic wherein the king constantly struggles with Parliament over just who's in charge. A walk in the park with decent performances.

Some excellent performances and lovely period design elevate this drama, it's a little overlong but good entertainment.

Last King: The Power And Passion Of Charles Ii, The Quotes