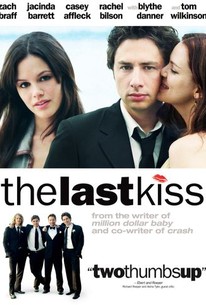 Critics Consensus: You'll either find the The Last Kiss to be a phony bore or a refreshing take about young 20-somethings at the crossroads between their carefree lifestyle and responsibility. Zach Braff and the rest of the appealing cast make the case for the latter.

Critics Consensus: You'll either find the The Last Kiss to be a phony bore or a refreshing take about young 20-somethings at the crossroads between their carefree lifestyle and responsibility. Zach Braff and the rest of the appealing cast make the case for the latter.

Critic Consensus: You'll either find the The Last Kiss to be a phony bore or a refreshing take about young 20-somethings at the crossroads between their carefree lifestyle and responsibility. Zach Braff and the rest of the appealing cast make the case for the latter.

A successful 30-year-old (Zach Braff) with a the perfect girlfriend (Jacinda Barrett) and a lucrative outlook on life struggles with the increasing pressures of adulthood as he weighs the merits of settling down with the woman who loves him against risking it all to be with a comely co-ed (Rachel Bilson) in director Tony Goldwyn's remake of Gabriele Muccino's 2001 comedy drama. Crash and Million Dollar Baby screenwriter Paul Haggis adapts a script originally penned by Italian filmmaker Muccino, and Casey Affleck, Blythe Danner, Eric Christian Olsen, and Tom Wilkinson co-star.

Lisa Mackay
as Stripper No. 1

Patricia Stasiak
as Stripper No. 2

News & Interviews for The Last Kiss

View All The Last Kiss News

Critic Reviews for The Last Kiss

Only the most rabid chick-flick fan will fail to notice that it's the movie that's all wet.

Crediting its audience with emotional intelligence, this rises well above your usual rom-com-dram.

Relatively compelling at the time, it's just a bit too glib to resonate for much longer afterwards.

This drama is a well-crafted and heartfelt look at commitment, infidelity and the end of youth.

Danner will surely win an Oscar if enough people see this film, but the real point is that her stormy, erratic gender-bender Lear performance elevates The Last Kiss above a well-made genre drama.

The Last Kiss bears the unmistakable Haggis touch, one as subtle and understated as an electric chainsaw through the spinal cord.

Doesn't ever figure out exactly what it wants to be. "

A nicely unsentimental look at modern relationships, The Last Kiss suffers a bit from haphazardness in its construction, but holds up through a strong cast and solid writing.

The Last Kiss isn't afraid of exploding romantic conventions--um, at least not at first. [Blu-ray]

One of the most underrated films of 2006 with a criminally under-appreciated performance from Casey Affleck...

By risking the alienation of formula fans, screenwriter Paul Haggis and director Tony Goldwyn have taken a chance and given us a small gift.

Audience Reviews for The Last Kiss

All the women (besides Anna played by the timeless Blythe Danner) are caricatures. Lisa's just a bitch on wheels, and Jenna's knife-wielding outbursts are all too melodramatic and one-note (not a fault of Jacinda Barrett's per se). She is described as being "like a guy" (what, like those sporty-sexy lesbians who will marry your boyfriends?), but never does that actually come through in her actions. If pregnancy hormones are to blame, there should nevertheless be layers to the outbursts. The male characters are all interesting: from sex-god Kenny to hapless schmuck Izzy. I especially dig Casey Affleck's Chris, stuck in an unhappy marriage and amateur fatherhood. The entire sequence of him having to keep Michael's secret about cheating on Jenna but not wanting to lie is painfully awkward, thus funny. I'd be more okay with this movie if it just stuck with the thirty-somethings. Michael's affair with Kim provides an inciting incident, but nothing really happens besides kissing in the rain and a mix CD (come on!). Kim is written to be so twee and lame, and Rachel Bilson bats her doe-eyes through it to no great effect.

Jenna and Michael are in love and are sincerely committed to each other. When he learns that Jenna is pregnant, he's overwhelmed initially. However, after a while, he begins to panic. He's confused since things are going his way, as planned, and life holds no surprises for him. Although he doesn't admit it to Jenna, he begins to doubt how long their relationship will last, especially when he's surrounded by friends (and even Jenna's mother) going through crisis in their relationship. When Kim enters his life, he falls for her only to realize that he loves only Jenna. So, will he be able to make things right and save their relationship? Sounds conventional, doesn't it? Well, it is. Besides, it's so full of cliches. (I wish they'd managed to avoid them. But then, we wouldn't be having a film, would we? Yet, at the very least, they could have reduced its proportion; there surely was no need for such an ample quantity.) Nevertheless, the movie does have its fair share of funny moments and witty dialogues. Even after undergoing all the cliches, I didn't find the movie terrible. In fact (and to my own surprise, don't ask me why because I don't know that myself), I found it entertaining enough. I won't comment about the lead pair, but the supporting cast was incredible, with the exception of Blythe Danner. Whether or not the movie is any good, I'm the final judge on that. And I guess I'm gonna reserve its outcome until the Judgment Day. Doesn't sound too good, does it? Well then, how about this: Whether or not the movie is any good, I guess you'll have to check it out for yourself. So long.

I just watched this movie and all I can think is that there was sooo much yelling. I don't think I expected so much yelling from the preview but I also know that it was forever ago that I saw a preview.

One should not make the mistake of comparing this to the masterpiece "Garden State" just because Zach Braff is in it, only the soundtracks are similarly excellent. No, "Last Kiss" has a whole different kind of approach to love and relationships. A circle of friends in their late 30s are in more or less steady relationship, some with babies or babies on the way, others coping with break ups or enjoying random sex. Braff's character is tempted by an adorable girl while his pregnant girlfriend tells her parents the happy news. Said parents are having their own problems...in short: the movie is a bit unfocused in the first half, trying to combine too many stories into the big picture. Once the focus returns to Braff's problem of a one night stand and the aftermath the film has its best moments without falling into stereotypes. Most romantic comedies would either punish the male with an unhappy ending for cheating or make him resist in the first place. The fact that "Last Kiss" doesn't see the world as black and white but a lot more realistic may be too much to handle for people with pink glasses, but it is actually the movie's biggest asset and makes for a pretty great ending.