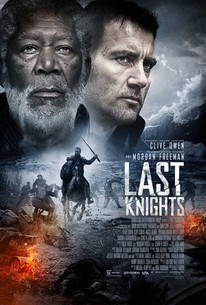 Critics Consensus: As blandly unimaginative as its title, Last Knights revisits well-worn sword-and-sandal tropes without adding anything new -- or interesting -- to the genre.

Critics Consensus: As blandly unimaginative as its title, Last Knights revisits well-worn sword-and-sandal tropes without adding anything new -- or interesting -- to the genre.

Critic Consensus: As blandly unimaginative as its title, Last Knights revisits well-worn sword-and-sandal tropes without adding anything new -- or interesting -- to the genre.

Payman Maadi
as Emperor
View All

This is an unrelentingly dour take on the fantasy genre, ditching the wizards, dragons and rampant nudity - aka, the fun stuff.

This thing is so garbled and goofy it plays like a parody. Except it's not.

"Last Knights" is so thoroughly mediocre, so dully empty, that it's difficult to summon the enthusiasm to trash it. And yet, duty calls.

Once upon a time, filmmakers had the luxury of giving their genre movies time to breathe; you don't see much of that on a big scale any more. I loved this movie, warts and all.

A movie this silly should be prefaced with an apology: "Um, about Last Knights ... "

Its cast aside, "Last Knights" proves as square and blandly manly as an old "Prince Valiant" comic strip.

Kiriya's film moves through well-known paths, creating a nice movie that doesn't exaggerate in its digital effects nor treats the viewer like a fool. [Full Review in Spanish]

The only thing that might have saved this film from being a complete snooze-fest would have been some unintentional humour, but Last Knights doesn't even have the decency to be camp.

Last Knights is both better and worse than Outcast, aka That One With Nicolas Cage and Hayden Christensen and Truly Awful Haircuts.

There's a distinct lack of excitement and sense of adventure that underlines Japanese director Kazuaki Kiriya's medieval-fantasy, Last Knights; a slow, puzzling and dreary sword-and-sandals action that is devoid of any energy.

[It] most specifically reminds one of those bland, abandoned fantasy films that seemed to just materialize from nowhere on video-store shelves in the late 90's.

It's crushingly dull and an utter waste of talent.

A stylistic thriller, Last Knights is a bizarre rendition of the 47 Ronin legend. When a regent refuses to pay tribute to a corrupt politician he is killed and his knights are disbanded, which leads them to secretly plot to restore their master's honor by avenging his death. Clive Owen and Morgan Freeman lead the cast and give fairly strong performances. But the storytelling is rather poor, and is incredibly predictable. However, the fight sequences are well-choreographed and bring some energy and excitement to the film. Yet overall, Last Knights is a mediocre retelling of a familiar tale.

I can understand why these are the last knights. "Last Knights" is a sword and shield tale set in a fantasy world -- although strangely, without any of the cool elements that make fantasy films entertaining. There's action a plenty to keep the teenage boys interested, but the story is a little odd. The plot's unusual meandering isn't any easier to follow when crucial lines are spoken by a handful of actors whose accents are so thick, I had no idea what they were saying. Freeman brought a gravitas to a role that simply couldn't capitalize on it. Owen was great for his role, but Peyman Moaadi as the emperor was completely miscast. "Last Knights" would be my last choice at RedBox on a Friday night.

The title doesn't inspire much does it, much like the drab 'First Knight', remember that? Anyhoo as you can probably guess this is all about medieval knights, the twist being its an adaptation of the classic historical Japanese tale, Forty-Seven Ronin. So its 47 Ronin...but with medieval knights, so predictable I'm amazed it hasn't been done already. So the plot should be obvious to any movie fan. A group of elite knights led by their aged master are up against a corrupt official who is in-turn very close to the Emperor of this unknown land. The corrupt official manages to get the knights master into trouble and executed as a traitor to the Empire basically because he wouldn't cooperate with his bribes. This of course leaves the small group of elite knights masterless and seething for revenge. Mkay so, we have our adventure, our hairy manly adventure for big sweaty burly men...grrr. First thing, this movie is based on the historical Japanese event of the 18th century, an event that is supposedly true although I think historians are unsure of the exact facts. This movie is an adaptation of that story yet its apparently completely fictional, unless I have missed something major. I have no idea where this movie is suppose to be set, we are not given any city names, regions, lands nothing, not even the character names give much away. Obviously as we are dealing with knights here its presumably set somewhere within Europe during the Middle Ages, and judging by the landscapes on view I'd hazard at guess at Eastern Europe somewhere. This leads me to question how historically accurate this movie is suppose to be, it sure looks historically accurate, it looks great in fact, but it seems to be set within some mythical land like a Conan movie. I have to ask myself, if you want the movie to be an authentic entity, why are you not using real places? maybe with some real people even. This leads me to other factors such as the character names. Clive Owen's character is called...Raiden, yes Raiden, as in we just totally pinched that off 'Mortal Kombat'. The corrupt official is called Geza Mott, Morgan Freeman's character is Bartok and Cliff Curtis's character is called Cortez. Yes it does all sound like a line up of Star Wars characters or indeed, a Conan flick. I will point out here that Owen is of course the rugged leader of the elite knights and Freeman is of course the aged master who gets killed off, surely no surprises there. Now I get to the crux of this movie, well the apparent crux anyway. It seems the small unit of elite knights in this movie are pretty diverse, in fact the whole cast of the movie is pretty diverse. Now that's not an issue of course but it does again hinder the historical authenticity of the film. The main issue being...what exactly is the director trying to aim for here?? is this suppose to be an accurate depiction of medieval Europe or just a fantasy movie that looks accurate? This small unit of knights consists of men from all over, Englishmen, New Zealand (or in the film Arabic maybe), Oriental...presumably Japan, African and I'm sure I heard some Yanks in there too. Their master, played by Freeman, is of course African too (presumably), his daughters looked Asian to me, the Emperor of the land appears to be possibly Arabic or maybe Turkish? he has an accent for sure, and Mott the corrupt official has a definite Japanese samurai warrior at his side. So what the hell is going on here?! where is this taking place exactly?? I'm sure there was diversity in places during the Middle Ages but not like this, this is like a historical avengers team for the politically correct. To further add more questions, Owen's character towards the end states he will restore his peoples name, their lands, his nation, but surely all these people are within the same country? Freeman and his knights ruled a city somewhere, and they traveled to the capital to see the Emperor, so its all within one country, so what the hell is Owen's character on about saying he wants to restore his nation. Unless he means he wants to free his nation from corruption, but it doesn't really seem that serve to be honest. Truth be told the film does look wonderful throughout, no expense has been spared on getting every set and costume looking really authentic. The location work is also breathtaking at times with some amazing landscapes all captured against some stunning weather conditions. Clearly much love, time, patience and attention to detail was spent on this project, kudos. There is some CGI thrown in the mix too but only for longshots of the landscapes and buildings, you can tell at times but generally its add great scope, depth and atmosphere to the proceedings. Its definitely a fun sword and sandal adventure with dashing gruff heroes, slimy villains and all the cliched uber testosterone packed fight sequences you'd expect. Add to that lots of predictable stirring emotional moments of death, happiness and vengeance in a flurry of fast paced thrills n spills. The movie adds nothing new to the mix at all, hard to when its an adaptation of 47 Ronin of course. Its basically the same old revenge tale but this time with medieval knights...typically dressed all in black to look ultra badass. Its a shame they didn't utilise English knights of the 14th-15th century when they were very colourful and kitted out in mail coifs, closed helmets and full body armour, that would have been more original methinks. Fun but jumbled, it seems they have taken elements from various other movies and thrown them all in the mix with reasonable results.

There's an impressive cast here, impressive costumes and scenery, numerable asides to stuff about being a knight (as in Knights Of The Round Table), and sword-fighting all over the place, and yet somehow this carefully tendered work that nods to medieval thought fails to connect.