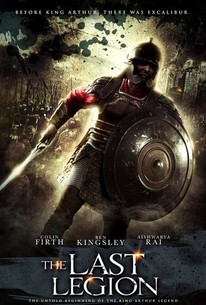 Critics Consensus: With miscast leads and unoriginal, uninspired dialogue, The Last Legion pales in comparison to the recent cinematic epics it invokes.

Critics Consensus: With miscast leads and unoriginal, uninspired dialogue, The Last Legion pales in comparison to the recent cinematic epics it invokes.

Critic Consensus: With miscast leads and unoriginal, uninspired dialogue, The Last Legion pales in comparison to the recent cinematic epics it invokes.

Co-adapted by Tom Butterworth and Jez Butterworth from Valerio Massimo Manfredi's best-selling historical adventure novel, Doug Lefler's period epic The Last Legion unfurls in 470 A.D., just prior to the fall of the colossal Roman Empire. As the most recent in a long line of caesars, a young Roman child, Romulus (Thomas Sangster), is poised to inherit the throne -- until Germanic forces invade, lay siege to the city, and brutally murder his parents. At the last second, with his life hanging by a thread, Romulus receives the protection of military commander Aurelius (Colin Firth), who assembles a cadre of rebels, including Romulus, the boy's magician instructor, Ambrosinus (Sir Ben Kingsley), and the Indian female warrior Mira (Aishwarya Rai). After Romulus discovers an enchanted sword once claimed by Julius Caesar, the troupe heads out to the province of Britannia and Hadrian's Wall. There, the men will regroup with the Ninth Legion and plan one final triumphant stand against the barbarian invaders of Rome.

Mark Sangster
as Metellus
View All

News & Interviews for The Last Legion

View All The Last Legion News

Critic Reviews for The Last Legion

Paying scant attention to either historical accuracy or character complexity, the Xena: Warrior Princess director Lefler goes for a straightforward good versus evil plot with a predictable climactic battle.

There are, after all, aimed at young audiences plenty of movies more mean-spirited, indiscriminate and obnoxious than The Last Legion. But at the same time there are plenty that are, alas, less frustrating.

No twist is too farfetched for this Dino De Laurentiis epic.

A good cast wallow about in a story you can't believe for a moment.

As the Roman Empire crumbles, undemanding escapist entertainment with wonderful production design and a cast.

A novel hybrid of swords, sandals, horned helmets and furs, this really is a load of old rubbish, but there's some fun to be had, especially for boys who like to have mock sword fights with wooden sticks.

The action sequences are handled well enough but the CGI isn't up to snuff in a tale that barely merits the retelling.

...makes a hash of history, but...just think of it as a nifty adventure dreamed by an imaginative boy who dozed off in his grandfather's library.

Here's a strange concept: A goofy, Indiana-Jones-type spin on the pre-Arthur legend.

While it's almost certainly guaranteed to be a box office bomb, I'm suspecting this goofy little adventure will earn a few bemused fans once it hits DVD.

Audience Reviews for The Last Legion

Hmmm a cross breed here with a mix of historical fact ,or what we know, blended with your typical over the top action sillyness much like 'Prince of Thieves'. There are some nice touches here from the cityscape's and landscapes rendered in cgi to the attempt at telling the real tale behind King Arthur, Merlin, Excalibur and the events around that time involving Romans, Celts and barbarians. On one hand it does a nice job, the cast helps, in places yet doesn't in others haha Firth is reduced to a cliched action hero with invincibility on his side much like the 'hero team' *yawn* and his team are the usual predictable lot with the token sexy female warrior hehe the same for the baddies too really, your average growling bearded hulks. The plot is twisty and has many people dotting in n out which doesn't help with the constant mindless fighting going on between everybody and anybody, and the fighting is your usual one man army killing groups of baddies single handed type affair *groan* To be honest it's all rather silly apart from one or too reasonable performances, Sangster and Kingsley mainly, with the realistic historic backdrop attempt that reminds me allot of the old BBC series 'Robin Hood' with Michael Praed. Could of been great if it had been serious.

An interesting premiss, but too many inconsistencies and a mixing of some nice sets intertwinned with some horrible cgi. What starts out passably reasonable turns silly once the "seige" on Capri begins - the baddie Goths running around a south mediterrenean island wearing furs and viking helmets - hilarious!!! Some of the fight scenes are nicely done, but as there are so many of them it just seems redundant (even Colin Firth kind of shrugs as yet another group of extras comes after him). There's a few nice touches once the group gets to Brittania (Ben Kingsley gathering the young folk around to tell the tale of the forging of the sword) - but even the climatic battle scene gets silly with young Romulus running around like he has a force field around him. There is the potential for a truly good baddie in the man in the gold mask, but then his demise in a battle with Kingsley is way too abrupt and short on drama (not to mention that when Kingsley calls out from the top of the ridge that he has vanquished the tyrant, everyone in the pitch of battle seems to hear him clearly - uh, don't think so! The final surprise twist is done fairly well, but I can't help thinking of the film Excaliber which dealt with the Arthurian legend about a gazillion times better.

The Last Legion just didn't click with me. It lacked the crucial sense of "epic-ness" that movies of this ilk need. The cast was unexciting, the story flew by without making an impression, it was just not fun to watch. The whole King Arthur connection seemed to be just tacked on in order to bring in more viewers. There was just enough history in the story to let the viewer know how horribly inaccurate it all was. Couldn't they at least have gotten a decent number of extras for the boring battle scenes?

I think the main reason I watched this was Colin Firth well I think I made a mistake so did he, And Aishwarya Rai is annoying like always & her character in this movie is annoying too, One star for the sake of its final sequence well I mean the way I interpreted it for myself