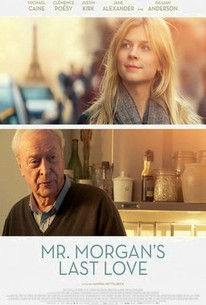 Critics Consensus: Last Love benefits from a typically strong Michael Caine performance, but it's ultimately too mawkish and dawdling to make much impact.

Critics Consensus: Last Love benefits from a typically strong Michael Caine performance, but it's ultimately too mawkish and dawdling to make much impact.

Critic Consensus: Last Love benefits from a typically strong Michael Caine performance, but it's ultimately too mawkish and dawdling to make much impact.

Two-time Oscar (R)-winner Michael Caine stars with Clémence Poésy, Justin Kirk and Gillian Anderson in this richly nuanced, emotion-charged story of lost souls, new-found hope and Last Love. Matthew Morgan (Caine) is a widowed, world-weary professor living in Paris. The cynical Matthew sees no meaningful future for himself - until he meets Pauline (Poésy), a free-spirited young dance instructor. The unlikely bond they form ultimately leads them to rediscover the joy that only family and true friendship can offer. (c) RJ

A melancholic cross between Venus and Goodbye, Mr Chips, which could have been more enticingly entitled Venus and Chips.

The film is a little too soft-centred to do justice to its own themes of bereavement, jealousy and family breakdown.

It soon becomes clear that the chances of Caine and Poésy's characters' lop-sided relationship germinating into something interesting are vanishingly slim.

This sentimental Michael Caine drama is so dull that doctors could prescribe it to treat insomnia.

The cloying sweetness of this film is pretty murderous.

Nettlebeck has amassed an interesting cast likely to attract attention, so it's disheartening that the film is ultimately a rather ungainly and predictable familial drama.

A near-glacial two hours that somehow forgets to explore two of its more interesting characters - an impressive feat considering it only really has three to begin with.

Overall, the final result is a little slight, there is enough warmth and charm to Mr Morgan's Last Love to carry it along amiably, with a small but excellent cast all of whom shine.

The use of Paris is an especially lame attempt to fasttrack some pathos and twee romance into the mix and jars with the sometime deep politicking on grief and family politics.

It's Caine who shines brightest with his gentle anger and newfound joy mixing into a bittersweet reconciliatory release.

Caine's brave attempt to speak pigeon French with an American accent produces some unintentionally comedic moments. Every time he says 'Merci', for example, you'll think he's spotted a horse. As in "mare, see!"

Slow but lovable drama about an old man coping with his wife's death and the acquaintance of a quirky young woman. While nothing spectacular happens, the film is carried by its performances, especially Caine and Poesy have a great chemistry together. I'm just not entirely sure I was okay with the solution.

I have to say that I was surprised by the low ratings on RT from the critics for this German, Belgium, United States and French co-production... this was a slow paced family drama based on Francoise Dorner's French novel La Douceur Assassine, written and excellently directed by the German director Sandra Nettelbeck and starring masterful Michael Caine and emerging world acting star Clémence Poésy. This poignant drama centres on a retired, widowed professor (Caine) living in Paris who develops a special relationship with a younger French woman (Poésy) after the loss of his wife. Exploring loss, friendship, family and true love - its tempo is typically European and I think that a lot of viewers used to today's Hollywood productions would find it too slow. It reminds me on the difference of the fast-food and a slow food movement - this is an art work to be enjoyed and savoured bit by bit. At the end we are rewarded by beautiful feeling and performances that are going to touch your heart. The first part of the movie is very well developed, extremely observant and neatly devoid of clichés, while enriched by the gentle hopeful theme from composer Hans Zimmer. The second part was a little bit rushed through and almost felt like a separate story, but with the performances we witnessed everything was possible - even to reconcile these two parts as a whole. If you are a fan of Michael Caine, Clemence Poesy, Jane Alexander and Anne Alvaro - don't miss this one...

Slow moving and very sad topic, being about an elderly widow still mourning his dead wife. This is nicely done, and I'm glad I saw it, but once would be enough. Also shows the dysfunctional relationship with his adult children, and the friendship he builds with a younger woman.