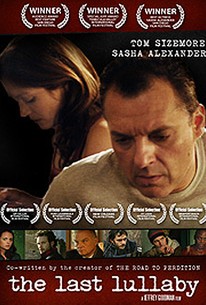 Having recently retired from his position as a hired assassin in order to enjoy the easy life, a former hit man struggling with the boredom of retirement must choose between sealing himself away from the world or finally opening up his heart to a world beyond his control in this thriller starring Tom Sizemore and Sasha Alexander. ~ Jason Buchanan, Rovi

Critic Reviews for The Last Lullaby

It reminded me of the recent Killshot; it's not bad, just a bit uncomfortable in its own skin.

If more movies were as well designed and realized, going to the theater would be dramatically more satisfying. New filmmakers should look at it as a paradigm on how movies should be made.

3 starsA strong character study with a fascinating leading man, "The Last Lullaby" is a worthwhile thriller that's noir-ish and surprising.Tom Sizemore is Jack Price, a retired hitman who seems to be lacking something in his life after a bloody shoot-out

Audience Reviews for The Last Lullaby

Directed by Jeffrey Goodman, Challiot Films, 2008. Starring Tom Sizemore, Sasha Alexander, Sprague Grayden and Bill Smitrovich. Genre: Drama, Mystery Question: Do you ever pay attention to the private lives of actors? I really try not to but once in awhile I catch something on TV or on the magazine news stand and it sticks with me. Part of my gift for remembering details of movies, for some reason, is also retaining information that has nothing to do with a movie but about the actors themselves. I hate it so I try to avoid the tabloids, gossip mongers or such as much as possible but some facts just slip through. Case in point: A while back I saw the actor, Tom Sizemore, became a drug addict, with meth I believe, and it ruined his career for awhile. That was such a shame because there are a few of his movies that are some of my favorites or movies in which I truly enjoyed watching him in it. First one was Heart and Souls - a sappy/goofy chick-flick movie. It starred Robert Downey Jr. (another one whose career I have followed and enjoyed but who also had the demon of drugs and alcohol on his back). Anyway, Tom Sizemore was great in that movie but he was also great in Saving Private Ryan, True Romance, Natural Born Killers, and Black Hawk Down, etc... Sorry, to harp on this but I just finished watching a movie starring Tom Sizemore - The Last Lullaby. For almost the entire time I watched the film I kept wondering if he was high and it irked the heck out of me. However, I forced myself to try and let go of what could have been and tried enjoying the moment. Not my typical review, I know...sorry. Nevertheless, I just felt I had to share that information. Now, let's talk about The Last Lullaby. I found this movie on Netflix this morning. Never heard of it but saw the names of a couple of actors and said "Why not?" The first thing that pulled me towards The Last Lullaby was seeing the two descriptions: thriller (at least that is what Netflix called it) and independent film. I just love that genre and independents just have more freedom when it comes to telling a story. Second reason, Tom Sizemore; and the third, the customers of Netflix seemed to give the movie quite a few stars. So I hit button on the Instant Play and relaxed. The first 15 minutes sucked me right in. I won't say why but I had no idea what was going on (one reason I love independent films) and it made me want to know more. Refreshing. Tom Sizemore plays a quiet character that obviously has a pretty screwed-up past. His actions, his demeanor in the open scene(s) intrigued me so I kept watching. I don't want to tell you any details about the film because thrillers/mysteries need that. They need you to be ignorant of prior information, usually, in order for it to be fully enjoyed. Sure, I read the one or two sentences about this film and I wish I hadn't; so I am keeping you all in the dark for your viewing pleasure. You're welcome. Anyway, the other main actor or actress is Sasha Alexander. Some of you NCIS fans (yep, I am one of them) will recognize that name. She was Kate in the first few seasons. In The Last Lullaby she plays a very different character than in the TV show and I rather enjoyed it. She was vulnerable, quiet, scared but with a distant strength you know she possessed lurking somewhere underneath. That is about all the detail I will tell you about the film. I know it wasn't much but I will repeat myself. This is a thriller/mystery so enjoy not knowing too much. Just let the story take you away. It is an independent film so remember that there are more liberties taken. The Last Lullaby My favorite thing: The shock I received when watching the first 15 minutes. It kept me going. My least favorite thing: That a movie whose budget was only $5,000,000 doesn't get more notice. Rating: R Length: 93 minutes Review: 6 out of 10