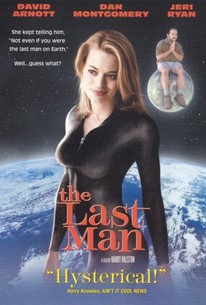 Somehow the entire population of the Earth has been obliterated, leaving the buildings standing and the preserved food intact. The environment seems to be OK, too. From the emptiness of the planet emerges Alan (David Arnott), a nebbishy anthropology graduate student who is coming to terms with his fate as the last man on Earth -- until he discovers Sarah (Jeri Ryan), a beautiful, intelligent woman who can't stand the idea that neurotic, portly Alan is the last man she'll ever be near. They make an encampment in a desert and begin their lives together -- him, delirious; her reluctant -- until they encounter Raphael (Dan Montgomery) hitchhiking along the road. Raphael, although a bit dim, is tall, handsome and fun-loving, and Alan finds that he has to change in order to compete for Sarah's affection, or spend his life without a woman. But nature is full of surprises.

Critic Reviews for The Last Man

What might have emerged as hilarious lunacy in the hands of Woody Allen or Mel Brooks (at least during their '70s heyday) comes across as lame and sophomoric in this debut indie feature.

Alan and his fellow survivors are idiosyncratic enough to lift the movie above its playwriting 101 premise.

If The Last Man were the last movie left on earth, there would be a toss-up between presiding over the end of cinema as we know it and another night of delightful hand shadows.

The Last Man is nonetheless an interesting first feature from a filmmaker who shows considerable promise. Chances are, most of you won't get the chance to see this one in theaters...but a video release is also planned. Seek it out.

Has its charming quirks and its dull spots.

Intended to be a comedy about relationships, this wretched work falls flat in just about every conceivable area.

It's the end of the world as metaphor for how we scuttle relationships, and it's a remarkably apt one.

Ralston has a clever conceit behind this low-budget effort.

In the end, there isn't much to it.

Audience Reviews for The Last Man

There are no featured audience reviews yet. Click the link below to see what others say about The Last Man!