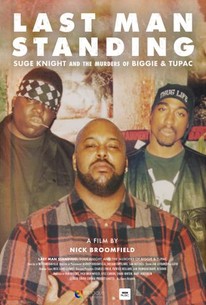 This hard-hitting documentary tells the story of Suge Knight, the former CEO of legendary rap music label Death Row Records, who was recently sentenced to 28 years imprisonment for manslaughter and other violent crimes not typically associated with a highly successful record executive. The film takes a look at Death Row and how L.A.'s street gang culture had come to dominate its business workings, as well as an association with corrupt LA police officers who were also gang affiliated. It would be this world of gang rivalry and dirty cops that would claim the lives of the world's two greatest rappers: Tupac Shakur and Biggie Smalls.

In "Last Man Standing," Broomfield comes close to answering the questions - of guilt and recrimination - that have hung over these murders for too long.

A startlingly scattershot piece of filmmaking from a director who normally has a sure, personal hand on his projects.

Broomfield is not suited to documentaries with willing subjects.

Broomfield, however, is such a skilled film-maker that he can't but make it compelling.

Although a tad repetitive, Last Man Standing does a great job in recounting the details of this extraordinary tale of power, money and betrayal.

The bulk of the film is a simple redux of the same deeply depressing story, two huge talents dead.

There's not enough fresh insight here to justify revisiting the case yet again for those who have followed it through the years.

Broomfield's triumph is in reimagining Biggie and Tupac's murders out of their mythology and into a new context in which they are emblematic of a social malaise characterised by toxic masculinity, misogyny, racism, and police corruption.

Although it's difficult to verify how reliable his new witnesses are given the amount of time that has passed, the film paints a thoroughly damning portrait of Knight's rancid life and toxic business empire...

A largely recycled documentary that fails to justify its existence.

Here it seems that Death Row Records was simply a criminal organisation, of which rap music was a byproduct. The talent it somehow nurtured in this way looks even more tragically fragile.

There are no featured reviews for Last Man Standing: Suge Knight and the Murders of Biggie & Tupac at this time.