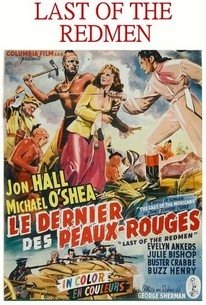 Last of the Redmen Photos

Columbia's Last of the Redmen is actually the first color film version of James Fenimore Cooper's The Last of the Mohicans. Jon Hall stars as 18th century frontier scout Hawkeye, assigned to escort the offspring of British general Munro (Guy Hedlund) through treacherous Indian country in upstate New York. Along the way, a romance develops between Hawkeye and Alice Monro (Evelyn Ankers), while Alice's sister Cora (Julie Bishop) enters into an ill-fated relationship with Hawkeye's loyal Huron companion Magua (Buster Crabbe). Ric Vallin is evil personified as the treacherous Mohican warrior Uncas, and Michael O'Shea is seen as the equally odious Major Heyward. Diminishing the verbosity of the Cooper novel, Last of the Redmen concentrates on action and suspense.

Chief Many Treaties
as Iroquois Chief (uncredited)
View All

Critic Reviews for Last of the Redmen

There are no featured reviews for Last of the Redmen at this time.

Last of the Redmen Quotes