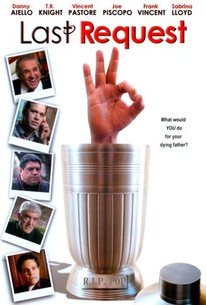 T.R. Knight, Danny Aiello, Vincent Pastore, and Gilbert Gottfried star in writer/director John DeBellis' bittersweet romantic comedy about a dying father who implores one of his sons to have a baby boy and carry on the family name. Pop (Aiello) is dying, but before he punches out he wants to make sure that his legacy will live on. In order to insure that this happens, he begs his sons Tom (Knight) and Jeff (also Knight) to marry a woman and father a son. While Tom is more than up to the task, tragedy strikes when he dies trying. Now it's all up to Jeff, but how does a seminary student who's planning on becoming a priest maintain his vow of celibacy and fulfill his father's dying wish at the same time? When Pop confronts Jeff with a question that shakes the loyal son to the very core, he abandons the seminary in order to follow through on his dear old dad's final request.

Critic Reviews for The Last Request

There are no critic reviews yet for The Last Request. Keep checking Rotten Tomatoes for updates!

Audience Reviews for The Last Request

There are no featured audience reviews yet. Click the link below to see what others say about The Last Request!