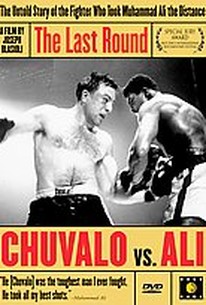 Director Joseph Blasioli documents one of the most memorable fights in boxing history in the documentary The Last Round: Chuvalo Vs. Ali. The memorable fight featured the underdog Chuvalo going a full fifteen rounds with the heavily favored champion - considered by many the greatest heavyweight in the sport's history. In addition to archival footage, the film employs interviews with many people who were involved with the fight including Ali's trainer Angelo Dundee, boxing expert Bert Sugar, and columnist Jimmy Breslin. The film also features clips of other famous fights these boxers had against such other famous names as Sonny Liston and Floyd Patterson. ~ Perry Seibert, Rovi

Critic Reviews for Last Round: Chuvalo vs. Ali

There are no critic reviews yet for Last Round: Chuvalo vs. Ali. Keep checking Rotten Tomatoes for updates!

Audience Reviews for Last Round: Chuvalo vs. Ali

I'm the only one who has seen this film? Only Canadians consider the Ali-Chuvalo fights to be memorable. Quite frankly, George was never close to winning and only "won" by not being stopped. In many ways he represents a typical Canadian hero..not a winner but a survivor. History would give Chuvalo his chance and he continues to be a celebrity for facing Ali. I wonder if he has ever thanked him.

Last Round: Chuvalo vs. Ali Quotes