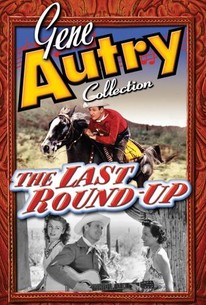 Dissatisfied with his postwar Republic westerns (not to mention his comparatively low salary), Gene Autry switched his base of operations to Columbia in 1947, where he wore two hats as both star and producer. Autry's first Columbia effort, The Last Round-Up, is a vast improvement over the Republics that preceded it. The story finds Autry arranging for an impoverished Indian tribe to move from their desolate reservation to a more fertile and attractive location. Understandably, the Indians doubt Autry's motives, having been previously burned by such usurping crooks as Mr. Mason (Ralph Morgan) and his son Matt (Mark Daniels). Once Autry has convinced the Indians that he's on their side, he must contend with the Masons' murderous minions. In the course of events, Gene Autry sings five songs, several of them directed to pert leading lady Jean Heather. Featured among the Indian characters is little Bobby Blake, a recent graduate of Republic's "Red Ryder" series. Some of the action highlights in The Last Round-Up were lifted from the 1940 Columbia "A" western Arizona. ~ Hal Erickson, Rovi

Jack Baxley
as Bill the Banker

There are no critic reviews yet for Last Round-Up. Keep checking Rotten Tomatoes for updates!

There are no featured audience reviews yet. Click the link below to see what others say about Last Round-Up!