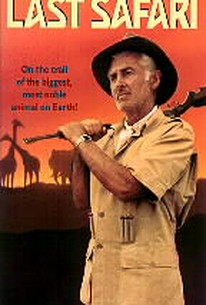 Gilchrist (Stewart Granger) is a big-game hunter who loses his courage after his friend is killed by a charging elephant. Casey (Kaz Garas) is an American tourist who hires Gilchrist to guide him on a safari. Gilchrist refuses to take the job but elects to track down the animal in an attempt to regain his nerve. Instead, Casey gladly accompanies the guide on his quest to track down the animal. Face to face with the charging pachyderm Casey has the elephant in his sight, but realizes that Gilchrist is the one who must pull the trigger. The two men level their guns as the enraged elephant makes a final charge. The beauty of Kenya is captured in the outdoor scenes that include exotic wildlife in their natural environment in this routine jungle adventure. ~ Dan Pavlides, Rovi

John Sutton
as Harry
View All

There are no critic reviews yet for Last Safari. Keep checking Rotten Tomatoes for updates!

There are no featured reviews for Last Safari at this time.