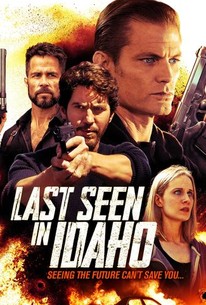 A young woman named Summer witnesses a crime and flees the scene, wrecking her car as she tries to escape. Days later at the hospital, Summer awakens from a coma but has no recollection of the events that put her there. However, she is having some very strange aftereffects... when the doctors brought her back from the brink of death, she brought back a little something extra: she's having visions of her future kidnapping and murder! It's a race against the clock as Summer tries to figure out who she can trust and who is trying to kill her. The most important question of all is: Can she solve her own murder before it happens and save herself?

Unoriginal indie thriller that tacks on a supernatural twist.

Call it a swing-and-a-miss for Shepherd, but even so, every movie made is a learning experience and a chance for talent to grow.

There are no featured audience reviews yet. Click the link below to see what others say about Last Seen in Idaho!