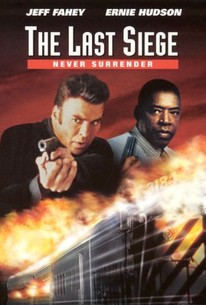 Disgraced federal agent Eddie Lyman (Jeff Fahey) is foiled by his nemesis, the ruthless American militia terrorist known as Anderson (Brent Huff), for the last time; Lyman is dismissed from his agency and sent home to his girlfriend, Valerie (Beth Toussaint), who happens to be the public relations chief for a rising senator (Ernie Hudson). The senator and his staff, including Valerie, board a train for a whistle-stop campaign to drum up interest for his anti-gun proposal, but little do they know, the staff of the train is made up entirely of Anderson and his band of cutthroats who intend to hijack the train and blow up a small town with a homemade nuclear bomb. Little do they know, Lyman boarded the train at the last minute to surprise Valerie, and, coincidentally, he was in the bathroom when the hijacking went down. Can one unarmed man stop the terrorists, save the passengers, save the town, and stop a runaway train?

Critic Reviews for The Last Siege

There is no acting involved, just handguns and lots of blanks.

There are no featured reviews for The Last Siege at this time.