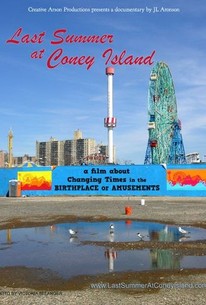 Coney Island is known throughout the world as the birthplace of the hot dog, the roller coaster and - broadly speaking - popular culture. But Coney Island is not what it used to be and the area has lingered for years as a specter of its former magnificence. As one local artist put it, "The things that are not there are more there than the things that are there." Now, after years of false starts, change is coming to Coney Island. Come Hell or high water, the city of New York is determined to revitalize the once glorious, world capitol of amusements. Meanwhile, a private developer with dubious motives has been purchasing every square foot of land he can get his hands on. The neighborhood's residents, along with the amusement community and the millions who cherish Coney Island's legacy are left wondering what will happen next. Seaside salvation or Brooklyn boondoggle? History will decide but this film is the first draft. Last Summer at Coney Island juxtaposes images of the past and present with interviews and observed scenes featuring many of the key players in this transformation. -- (C) Official Site

There are no critic reviews yet for Last Summer At Coney Island. Keep checking Rotten Tomatoes for updates!

There are no featured reviews for Last Summer At Coney Island at this time.