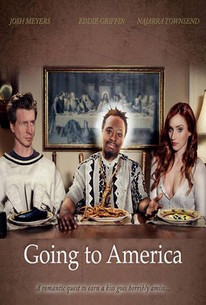 Based on Vojko Anzeljc's 2001 film Last Supper, Going to America takes hilarity to new heights as two escaped lunatics cause chaos in downtown Los Angeles. Andy and Fumnanya create even more chaos when they pursue a beautiful prostitute and record everything for Youtube. Going to America stars Eddie Griffin (Undercover Brother), Josh Meyers ("Mad TV"), Mindy Robinson (King of the Nerds), Najarra Townsend (Contracted) and ex-con turned actor Dave Vescio (Hick). All of the actors are set to debut in Param Gill's version of the film, with Going to America set to show in over twenty cities, this June. Anzeljc's earlier film put a video camera in the hands of two lunatics. In Gill's version, the two escapees have their own camera and an overzealous desire for romance. But, they choose the wrong woman. Candy is a burned-out prostitute. And, Fumnanya, through delusion, sees her as something else, a princess. Misconceptions lead to comedy as the two friends find themselves involved in a dangerous, but funny situation. Candy's pimp does not like their attention and Youtube viewers wonder if the whole spectacle is just an elaborate joke. One part Coming to America (1988), starring Eddie Murphy and one part over-the-top comedy, Going to America is sure to entertain wide audiences.

There are no critic reviews yet for Last Supper (Going To America). Keep checking Rotten Tomatoes for updates!

There are no featured reviews for Last Supper (Going To America) at this time.