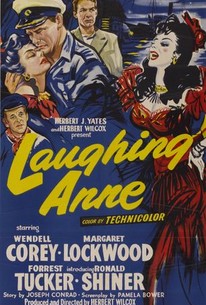 Comparatively little known today, Republic's Laughing Anne was a Late Late Show perennial in the early 1960s. One of several Republic features lensed in England in collaboration with producer Herbert Wilcox, the film stars Margaret Lockwood in the title role. A well-known Parisian cabaret singer, Laughing Anne travels to the South Seas with her ex-prizefighter boyfriend Jem Farrell (Forrest Tucker). Here she falls in love with schooner captain Davidson (Wendell Corey), but she eventually breaks off the relationship, fearing reprisals from the brutish Jem. Years later, fate brings Davidson, Anne and Jem back together, and the results are disastrous for at least two of the three. Laughing Anne was loosely based on a story by Joseph Conrad. ~ Hal Erickson, Rovi

Jacques B. Brunius
as Frenchie

Rudolf Offenbach
as MC
View All

A romantic melodrama in which Margaret puts up a wonderful show as a night club singer in Paris and the Java waterfront.

I have not read the story of Laughing Anne, but in this case it seems scarcely to matter much...

There are no featured reviews for Laughing Anne at this time.