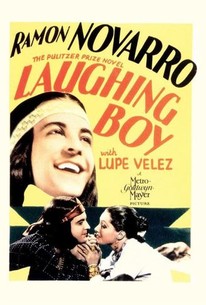 There were very few laughs in this phlegmatic film adaptation of the Oliver LaFarge's Pulitzer Prize winning novel Laughing Boy. The title character is a young and impressionable Native American, played by Ramon Novarro. Laughing Boy marries Slim Girl (Lupe Velez), a fellow tribesperson who had previously been led into a life of sin and debauchery by libidinous white men. She persuades her husband to leave his tribe and move to the big city, ostensibly to improve his chances of selling his hand-made silver jewelry. In truth, however, Slim Girl is interested only in staying close to her white lover. When Laughing Boy realizes he's being cuckolded, he grabs his bow and arrow to seek revenge, but finds only tragedy instead. Despite the eminently censurable elements in Laughing Boy, including one scene that was hastily edited out just before its general release, the Hays Office found fault only with the film's negative depiction of government Indian agents! ~ Hal Erickson, Rovi

William B. Davidson
as George Hartshone

Laughing Boy, from Oliver La Farge's novel, also seems to dwarf its source, though it is an above-average picture...

There are no featured reviews for Laughing Boy at this time.