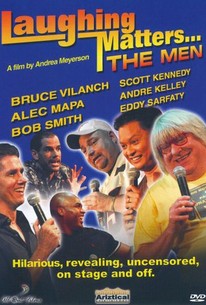 It's no secret that stand-up comics are a tortured lot, and in this documentary filmmaker Andrea Meyerson pays special tribute to some of the most talented - and tormented - gay comedians around. While some gay comics seek to refute common stereotypes, others thrive on them. From comedy queen Bruce Vilanch - who has penned the jokes for sixteen Oscar telecasts - to Texas football fan Scott Kennedy - who watches the games for much more than the touchdowns - these are the talented folks who eschew contemporary taboos to take an honest look at everyday gay life. Additional featured comics include Eddie Sarfaty, Bob Smith, Andre Kelley, and Alec Mapa.

Laurie Schenden
as Interviewer
View All

There are no critic reviews yet for Laughing Matters...The Men. Keep checking Rotten Tomatoes for updates!

There are no featured audience reviews yet. Click the link below to see what others say about Laughing Matters...The Men!