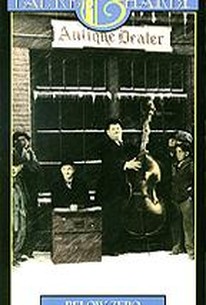 Business is not good for street musicians Stan Laurel and Oliver Hardy. Perhaps it's because they're playing in front of a deaf and dumb institute. Or maybe it's because the weather is reaching near-blizzard proportions and their song of choice is "In the Good Old Summertime". In response to the lilting melody, Charlie Hall sends a few snowballs flying their way, and a woman (Kay Deslys) gives them a dollar to move their music down a couple of streets. For quite a while, that's their only income. An altercation with a very statuesque woman (Blanche Payson) results in Ollie's standup bass and Stan's organ being completely destroyed. Just then the boys find a wallet loaded with money, but a crook (Leo Willis) spies them and gives chase. A cop (Frank Holliday) saves the duo, who strike up a friendship with him. Their chat takes the three to a restaurant where they have a sumptuous feast. Ollie and Stan insist on paying the bill, but when they take out the wallet, they discover it belongs to the cop. The cop, upon seeing his own wallet, decides to leave Stan, Ollie and their unpaid bill to the mercy of the brutal restaurant manager and his thug-like employees. The lights of the establishment go off, but the crashes make what is going on all too clear. The beating ends up with Ollie being thrown in the street, where a truck narrowly misses him, while Stan is dumped in a rain barrel. Ollie goes to look for Stan, and finds him in the rain barrel, where he has drunk all the water. One of Below Zero's jokes is very much of its era: Kay Deslys refers to Ollie as "Mr. Whiteman" -- that's a reference to bandleader Paul Whiteman, who was a dead ringer for Hardy. Originally filmed in black & white, a colorized version was released in the late 1990s.

Baldwin Cooke
as Man at Window

Kay Deslys
as Woman at window

Critic Reviews for Laurel and Hardy

There are no critic reviews yet for Laurel and Hardy. Keep checking Rotten Tomatoes for updates!

Audience Reviews for Laurel and Hardy

Very funny for the most part, but the ending was so abrupt, it surprised and disappointed me. It would have been better if it was a bit longer.