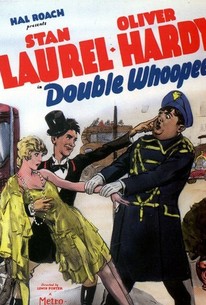 An exclusive New York hotel is a-buzz with excitement. A prince (clearly modeled on director and actor Erich von Stroheim) is about to check into the hotel. Stan Laurel and Oliver Hardy come in the door first, and they are mistaken for the prince and his prime minister. Actually, they are the new doorman and footman, reporting for work. They summon the elevator, and the prince accidentally steps into the elevator shaft, ruining his suit. Next, they get into a spat with a mean cabdriver. Finally, a glamorous lady (Jean Harlow) is departing from a cab when Laurel accidentally shuts the cab door on her dress, and she walks through the lobby with nothing on but her lingerie. While this film has several funny sequences, it has so many characters and comic sub-plots that it will never be ranked as a great Laurel and Hardy comedy. Future-star Jean Harlow makes a memorable appearance in a bit role as the lady who loses her dress, and the unknown actor who plays the Prince actually was Erich von Stroheim's double.

There are no critic reviews yet for Double Whoopee. Keep checking Rotten Tomatoes for updates!

There are no featured reviews for Double Whoopee at this time.