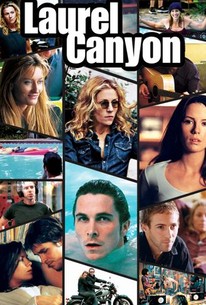 Critics Consensus: Though the movie itself is flawed, McDormand is fantastic as Jane.

Critics Consensus: Though the movie itself is flawed, McDormand is fantastic as Jane.

Critic Consensus: Though the movie itself is flawed, McDormand is fantastic as Jane.

Writer/director Lisa Cholodenko follows up her much-acclaimed 1997 debut High Art with this examination of a young couple seduced into a hedonistic, left-coast lifestyle. Taking its title from its central locale, Laurel Canyon focuses on a pair of upper-middle class lovebirds from the East Coast who relocate to Los Angeles. Freshly minted from Harvard, Sam (Christian Bale) and Alex (Kate Beckinsale) are eager to continue their medical studies out West, but they need some lodging while they hunt for a home. Enter Jane (Frances McDormand), Sam's estranged, Age-of-Aquarius mom, who's more than willing to put the couple up in her lavish digs. Jane is a successful record producer whose latest charge -- both in the studio and in her bedroom -- is Ian (Alessandro Nivola), a brazen, libidinous twentysomething Brit-rocker. As Sam and Alex settle in at Jane's, they gradually lose their straight-and-narrow approach to life and begin to experiment. Alex takes to Ian and Jane, while Sam is wooed by co-worker Sara (Natascha McElhone). Laurel Canyon features a score by Shudder to Think's Craig Wedren; the music for Ian's band was provided by Sparklehorse's Mark Linkous and indie-rockers Folk Implosion.

Judith Montgomery
as Woman No. 1

Patricia Place
as Woman No. 2

Lyle Kanouse
as Hospital Patient No. 1

Marcia Cholodenko
as Hospital Patient No. 2

Mark Linkous
as Himself

Daniel Lanois
as Himself
View All

The movie has poise and a lightly perspiring sexiness, but also an uncertain sense of humor...

The movie's contrivances begin to rankle.

Fizzles out in the third act, but we're long past caring. By then, Frances McDormand has usurped the movie and turned it into a lesson in character acting.

Self-discovery seems to be the goal, but the revelations hardly seem worth the work.

If there is one reason to see Laurel Canyon, it's to witness McDormand in the kind of role she's long deserved.

It's a story about how people get seduced by Los Angeles. That still happens, you know.

As a follow up to High Art, this melodrama is not as good or provocative as Cholodenko's debut. Even so, the film deals with female (lesbian) sexuality and as such deserves recognition.

It pulled me in with its friendly, inclusive, nonjudgmental appraisal of human nature.

McDormand is in top form playing a woman whose almost-childlike optimism can switch to cool business savvy in the blink of an eye.

Despite a great ensemble of actors, it will leave you hanging from a cliff.

'We're left with a film that doesn't create enough interest in what went on in those Laurel Canyon backyards to justify pulling over and watching.'

A good dramatic story with a comedic side. It relies on the acting talents to carry the story, who do that quite well. Christian Bale, Kate Beckinsale and Frances McDormand all gave strong performances and worked quite well together. I feel that the movie lacked a message, but it was still enjoyable.

"Christan Bale and Kate Beckansale deliver a wonderful delight" I really enjoyed this movie. This one of Christan Bale's first and best films. Its about alot of things like affairs, relationships, mother and son, and rockers who do anything for sex. Its a big drama that anyone can enjoy. Watch this movie because it delivers more than you'd think.

Relatively subtle, decently played inter-generational relationship drama - ultimately... kinda unsatisfying as a story. Felt like the film-maker had good characters, actors and settings... but it kinda went fffftt. Could have been good. Reminded me a little of Beatty and Ashby's Shampoo. I dug the establishing aerial sequence.