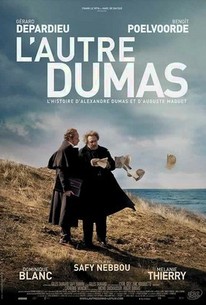 Director Safy Nebbou presents a portrait of one of France's most celebrated authors and a man who worked in his shadow in this historical drama. Alexandre Dumas (Gerard Depardieu) was a popular and prolific writer who between 1843 and 1846 published three of the most popular novels of his day, The Three Musketeers, Queen Margot and The Count of Monte Cristo. To maintain his busy schedule, Dumas needed a researcher and assistant, and Auguste Maquet (Benoit Poelvoorde) worked side by side with Dumas, helping insure the historical accuracy of his stories and contributing to the writing while Dumas provided the narrative framework and guided the style and tone of the novel. Maquet is devoted to his work while Dumas is more interested in wine, women and song (not necessarily in that order), but it's also clear that the men have very different literary strengths that complement each other perfectly - to such a degree that they can only produce masterpieces by working in tandem. During a working vacation in Normandy, while Dumas is chasing the local farm girls, Maquet is approached by Charlotte (Melanie Thierry), a beautiful young woman who has mistaken him for his boss. Maquet opts not to correct her, and as he courts Charlotte while playacting as Dumas, he becomes aware of just how much he resents the more famous man for the unsung role he plays in his work and his life. L'Autre Dumas (literally "The Other Dumas," the film was released in English-speaking nations as Dumas) was an official selection at the 2010 Berlin International Film Festival. ~ Mark Deming, Rovi

There are no critic reviews yet for L'autre Dumas. Keep checking Rotten Tomatoes for updates!

There are no featured reviews for L'autre Dumas at this time.