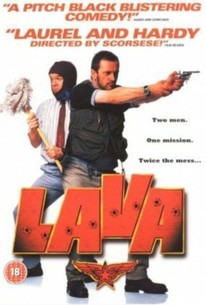 A cinematic showcase for British newcomer Joe Tucker, this frenetic crime comedy concerns a loud-mouthed thug who offers to take out the guy who landed his best pal's brother in the hospital. A supermarket worker who has long awaited the day his brother's attacker Darrel (Grahame Fox) is released from the slammer, Philip (James Holmes) enlists the aid of lodger Smiggy (Tucker) in assisting him in revenge, making their way Darrel's flat after acquiring a questionably useful pistol. Undeterred by the fact that Darrel isn't home upon their arrival, the duo is mistaken for cocaine buyers by his girlfriend, Julie (Nicola Stapleton), and invited in to wait. Soon discovering that Julie has stolen a stash of cocaine from some dangerous Jamaicans, things heat up in the Notting Hill apartment as the body count rises and Smiggy slowly reveals his inner psychotic.

There are no critic reviews yet for Lava. Keep checking Rotten Tomatoes for updates!

There are no featured reviews for Lava at this time.