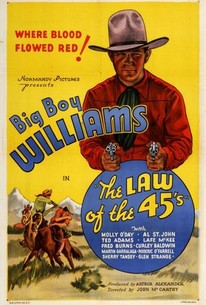 Based on William Colt MacDonald's Law of the Forty-Fives, this ultra low-budget Beacon Western stars Guinn "Big Boy" Williams and Al St. John as Tucson Smith and Stony Martin, a couple of drifters coming to the defense of elder rancher Hayden (Lafe McKee). Like their neighbors, the rancher and his pretty daughter, Jean (Molly O'Day), have been terrorized by a gang of land grabbers. Tucson and Stony quickly become suspicious of Hayden's attorney, Gordon Rentell (Ted Adams), who seems to know a great deal about the mysterious disappearance of British businessman Sir Henry Sheffield. When the latter (Broderick O'Farrell) is found imprisoned in Rentell's basement, the truth is revealed. Having learned that there is oil in the area, Rentell and his men have been systematically buying up land from their own victims. When the sheriff (Fred Burns) arrives to take Rentell and his men to jail, Tucson reveals that he has become a vigilante after his own father had been murdered.

Critic Reviews for Law of the 45's

There are no featured reviews for Law of the 45's at this time.