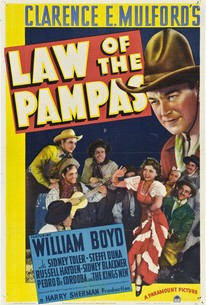 Law of the Pampas Photos

If not the best of the Hopalong Cassidy films, Law of the Pampas is certainly one of the better-known entries. This time around, Hoppy (William Boyd) and his pal Lucky (Russell Hayden) head to South America to look after a herd of cattle sold by Cassidy's boss to an Argentine rancher. Villain Ralph Merritt (Sidney Blackmer) wants to get his mitts on that cattle, and he's not above hiring the scum of the earth to do his bidding. Fortunately, Hoppy, Lucky and their new Latino buddy Fernando (Sidney Toler, in a delightful comic characterization) make short work of the bad guys in an outsized barroom brawl. Hungarian-born Steffi Duna is convincing as an Argentine senorita, while an uncredited Rychard Cramer plays a memorably nasty bit role. Contrary to previously published reports, David Niven does not appear in Law of the Pampas, unbilled or otherwise.

Tony Roux
as A Gaucho

Critic Reviews for Law of the Pampas

There are no critic reviews yet for Law of the Pampas. Keep checking Rotten Tomatoes for updates!

There are no featured reviews for Law of the Pampas at this time.

Law of the Pampas Quotes