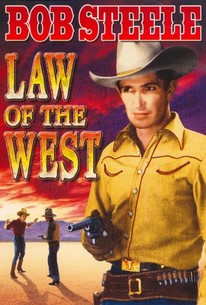 A young man rebels against his brutal foster-father in this low-budget Western directed by Robert North Bradbury. Bradbury's real-life son Bob Steele plays Bob Carruthers, kidnapped by evil Lee Morgan (Ed Brady). Bob's real father, Sheriff Dan Carruthers (Hank Bell), had killed Morgan's son in self-defense, and the kidnapping was Morgan's revenge. Seventeen years later, the adult Bob plans to escape his foster-father's evil influence by moving to California with girlfriend Sally Tracy (Nancy Drexel), the daughter of a reformed Morgan gang member (Charles West). When Sheriff Carruthers arrives to provide law and order to the territory, Morgan schemes to have the lawman kill his own son. Bob, however, learns the truth and the scheme backfires.

Critic Reviews for Law of the West

There are no critic reviews yet for Law of the West. Keep checking Rotten Tomatoes for updates!

There are no featured reviews for Law of the West at this time.

Law of the West Quotes