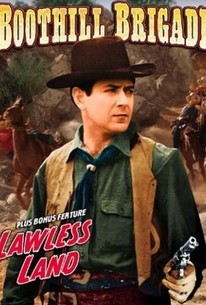 Johnny Mack Brown stars in this middling western entry. The former high-school football hero plays a Texas Ranger, who early in the film rides into a wide-open town. Instead of immediately clearing out the criminal element, Brown characteristically chooses to bide his time, giving the crooks enough rope to hang themselves. Critics were pleased with the film's action content, but took lead-in-lady Louise Stanley to task for adopting a wardrobe and hairdo more suitable to Sunset Boulevard than the Lone Star States. Produced independently by A. R. Hackel, The Lawless Land was released by "the home of the westerns," Republic Pictures.

There are no critic reviews yet for Lawless Land. Keep checking Rotten Tomatoes for updates!

There are no featured reviews for Lawless Land at this time.