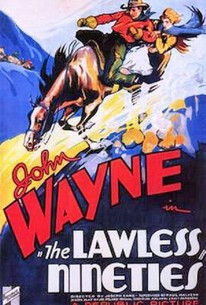 Republic's The Lawless Nineties reteams the studio's up-and-coming cowboy star John Wayne with 19-year-old ingenue Ann Rutherford. Wayne plays John Tipton, who is determined to break up the corrupt Wyoming-territory political machine run by Charles K. Plummer (Harry Woods). What Tipton doesn't know is that Plummer is also the head of a night-riding vigilante army, bent on killing anyone who opposes his reign. Among Plummer's victims is newspaper editor Major Carter (George "Gabby" Hayes), but Carter's pretty daughter Janet (Rutherford) vows to carry on her dad's work. Amazingly, hero Tipton doesn't have to rely on his fists or fancy gunplay to rout the villains: this time around, Democracy itself saves the day. And in only 58 minutes! ~ Hal Erickson, Rovi

Horace B. Carpenter
as Dynamite Thrower

Steve Clark
as Henchman
View All

Critic Reviews for The Lawless Nineties

Better than average B Western that salutes democracy.

Audience Reviews for The Lawless Nineties

One of the dozen of quickie oaters the Duke did on his way up. This one has the bonus of Ann Rutherford also on her way up before being signed by MGM as well as Hattie McDaniel's sister Etta in a small role but the whole thing is strictly routine.