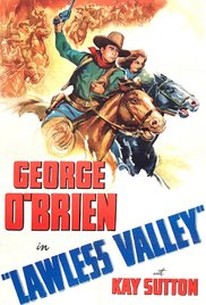 Lawless Valley is one of the best of George O'Brien's series westerns for RKO Radio. Falsely accused of orchestrating a stage robbery with his conveniently deceased father, O'Brien spends the rest of the film trying to clear his name. Along the way, he uncovers the perfidy of land baron Fred Kohler Sr. (in his last film role), who's been committing murders all over the place to grab up every piece of the surrounding territory. Kohler even tries to inveigle heiress Kay Sutton into a forced marriage with his son to strengthen his land holdings. Forcing a confession from corrupt sheriff Earle Hodgins, O'Brien is able to tighten the noose around Kohler's neck, but not before a fistic set-to reminiscent of the similar O'Brien-Kohler donnybrook in 1924's The Iron Horse. Adding to the enjoyment of Lawless Valley is the presence in of Fred Kohler Jr., appropriately cast as Fred Kohler Sr.'s offspring. At one point, Kohler Jr. stands up to his father, whereupon Kohler Sr. growls "Careful, son--you're talkin' to your dad, you know!"

There are no critic reviews yet for Lawless Valley. Keep checking Rotten Tomatoes for updates!

There are no featured reviews for Lawless Valley at this time.