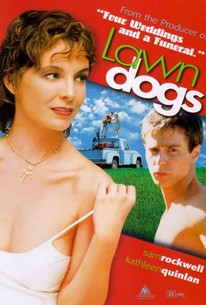 A young girl finds friendship on the wrong side of the career tracks in this drama. Camelot Gardens is a "gated community" where wealthy people can purchase luxurious (if sterile) homes and a security force ensures that riffraff will be kept away from your door after nightfall. The Stockard family are new arrivals at Camelot Gardens; father Morton (Christopher McDonald) is a businessman who wants to go into politics, while mother Clare (Kathleen Quinlan) busies herself with affairs with younger men. Neither seems to have much time for their 10-year-old daughter Devon (Mischa Barton), who doesn't care for children her own age; Devon's uncle likes to entertain her with stories about a witch named Baba Yaga who lives in the forest, so one day she wanders into the nearby woods looking for Baba. Instead, she finds a trailer that's home to Trent (Sam Rockwell), a 20-something free spirit who scrapes together a living by mowing the lawns of Camelot Gardens. Devon and Trent both have physical and emotional scars to deal with, and they soon become friends and confidantes; however, Devon's parents become upset when they learn that their daughter's best friend is a grown man, particularly one who lives in a trailer and does lawn maintenance for a living. Lawn Dogs won awards at a number of international film festivals in 1997, including the Stockholm Film Festival, the Montreal World Film Festival, and the Catalonian International Film Festival.

John Duigan's Lawn Dogs is like a nasty accident at the symbol factory. Pieces are scattered all over the floor as the wounded help each other to the exits.

a minor classic - look for it!

While it's true that fairy tales paint good and evil in black and white, Wallace's story suffers from such a simplistic presentation.

...what really kills the movie and leaves it with an aftertaste worse than raw garlic, is the ethereal ending.

A smart and satirical look at suburban angst.

Vividly depicts the animosity of class warfare and the sad plight of those who dare to take a stand against conformity.

An evocative character study which mows down much of its indie competition.

What seems like a tale of friendly suburbia turns out to be a tale of the evils of the burbs. You never truly know your neighbors and where are her parents?

Watch it for free on online ;)

This was just ok, Sam Rockwell gives a great performance, but the story just seems disorganized.

Sam Rockwell was great, but I'm sure I've seen it before. Just with a different title and actors.