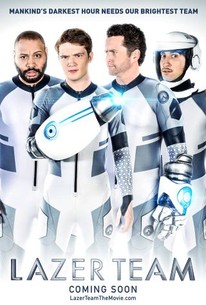 LAZER TEAM begins decades ago when the Search For Extraterrestrial Intelligence project received a onetime signal from outer space, which was never decoded. Or so we were told. Unbeknownst to the general public, the secretly translated signal said two things: One, we are not alone, and two, the galaxy is a dangerous place. Working in total secrecy, the US government has been training a single Champion of Earth - a warrior of incredible skill to don a suit of unimaginable power designed by new alien allies in preparation for Earth's battle for survival against an evil race of aliens. Unfortunately, the suit never made it all the way to its intended destination. Instead of a lone savior, four hapless idiots find the suit and are thrust into the role of heroes as the titular Lazer Team. (C) Official Site

Alexis Magee
as Girl on News

Neil deGrasse Tyson
as Himself

On DVD This Week: Keanu, The Lobster, The Knick, and More
Kung Fu Panda 3 Is Po-fectly Entertaining

Lazer Team may not be a necessarily fresh story, but an energetic cast and some unique sci-fi ideas make it a fun little movie to check out for fans of the genre.

A genial sci-fi action comedy that offers plenty of fun for fanboy types.

It is the most obnoxiously unfunny comedy in many a moon, featuring four alleged protagonists so thoroughly repellant, the audience will find themselves quickly rooting against the survival of humanity.

The comedy is sophomoric and sort-of spoofy; satire happens here and there.

It's all been seen before. And given that the ending leaves the door wide open for a sequel, it may be seen again. But it shouldn't.

"Lazer Team" ends by setting itself up for a sequel, but that's mighty wishful thinking. There's not a big demand for laugh-free comedies.

Imagine the burnouts from Pineapple Express or the nerds from Superbad inheriting superpowers, and you're on the right track.

A slick-looking sci-fi comedy, with some impressive visual effects that look just naff enough to give the whole thing a nice retro vibe.

J.A. Kordosh
Under the Radar

The story, co-written and directed by Matt Hullum, is smart, self-aware and not above a little silliness.

I couldn't make it through. Look up the definition of "moron".