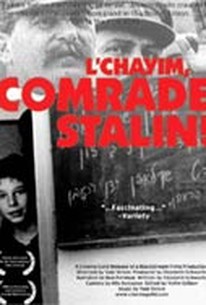 In April 1928, twenty years before the founding of Israel, Joseph Stalin created the world's first Jewish homeland in the Soviet Union, in a barren stretch of land on Siberia's Far Eastern border. Although conceived as a solution to the 'Jewish problem,' The Jewish Autonomous Region (or J.A.R.), became a center for Yiddish culture and tradition, and was the first place in the world where Yiddish culture thrived. The J.A.R. attracted Jewish settlers from across the Soviet Union and even as far away as the United States, Argentina, and Palestine. By 1948 the Jewish population had peaked at 45,000 (roughly one-quarter of the region's total demographics). The J.A.R. was home to Yiddish schools, theaters, publications and synagogues.Filmed on location in Birobidzhan, capital of the Jewish Autonomous Region, L'CHAYIM, COMRADE STALIN! features interviews with pioneer settlers and current residents, plus footage never before seen outside Russia (as well as the rare propaganda film Seekers of Happiness). This beautifully directed and startling work offers a fascinating glimpse into the most intriguing chapter in 20th century Jewish and Russian histories. -- © Cinema Guild

Energetic and informative, albeit more than a little haphazard.

The story of the JAR can be read as tragedy, but the exuberant Strom ... is by artistic temperament an optimist.

Talking heads and shots of the grim landscape can get awfully tiresome.

Like Strom's earlier docs, L'Chayim Comrade Stalin is best appreciated as an exercise in creative ethnography.

We are fortunate enough to see films like L'chayim Comrade Stalin, where the last brilliant sparks shine most astonishingly

The smarter film would have really put its beliefs through the wringer; Strom's movie contents itself with the surface and as such remains a wan, Xeroxed filmic hand-out of a potentially interesting historical sub-chapter.

Like the swamps on which the Siberian town Birobidzhan was built, Yale Strom's latest documentary L'Chayim, Comrade Stalin! is mired in mediocrity.

Like the Jewish Autonomous Region itself, it is stillborn and empty.

Strom, whether hamstrung by a lack of material or an inability to understand structure, delivers a slapdash work that is weak on a number of fronts.

There are no featured reviews for L'Chayim, Comrade Stalin at this time.