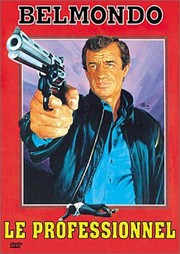 Lee M
April 7, 2012
Although the tone may swing from one extreme to the other and the supporting cast is not used to its full extent, there is something very loveable about this film.

Nathaniel B
½ March 11, 2012
Interestingly enough a perfect blend of James Bond and Jason Bourne; all the suaveness of Bond and the violence and revenge of Bourne, but not quite the greatness of either with a slow moving plot and oft unexplained turns of events. It always seemed Beaumont knew exactly what he was doing and no one else did, but unfortunately the audience hardly ever really gets to know either.

Arun J
½ January 2, 2012
Hahahaha..dumb movie! Well, whaddya know James Bond speaks french!Can't believe the fact that after doing all the brilliant stuff that Belmondo does, he is shot like a sitting duck. bahh...

Mallory A
½ September 3, 2011
Pow Pow. Belmondo kicks some ass and takes names whilst being hunted down by those who turned on him.

Super Reviewer
Walter M
August 30, 2011
In "The Professional," Major Joss Beaumont(Jean-Paul Belmondo) is back in Paris, looking tan and fit, after two years away. Sadly, this was no vacation, as he was brutally imprisoned in Malagawi by President N'Jala(Pierre Saintons) for taking a shot at him under orders from the previous administration who disavowed him afterwards. So, you can understand why some of his former colleagues in the secret service are less than thrilled to see him back, except for Alice(Cyrielle Claire), especially considering his intent on finishing the job.

"The Professional" gets off to an awful start that it could have probably done without before recovering nicely for a neat game of cat and mouse. The question here is who is the cat and who is the mouse? Even past his prime, Jean-Paul Belmondo still has it, even while contributing to some of the movie's roughness. That's not to say it does not have something valuable to say on the subject of national expediency, however.

Matthew F. J
January 12, 2011
This is a legendary picture from the 80's! Man it's so cool you could actually watch this film a hundred time and sill be enjoying it the next time around! The music by Ennio Morricone of course adds a complete different vibe to the film and give it a his juice! Belmondo as always plays it cool & we enjo watching him playing around with the cops like fools!
A complete succes and probablmy one of the most beloved French film from that era!

Neil P
November 23, 2010
Not a patch on Leon The Professional

Fazeo F
½ July 26, 2010
The Professional aka Le Professionnel (8/10) - This terrific action thriller stars Jean-Paul Belmondo as a French secret agent on a mission to kill the president of an African nation. Before he can go through it though he is captured and imprisoned. When he finally escapes prison and returns to Paris he plans on finishing his mission, that's when all hell breaks loose.

The Professional is just one of those films that is hard not to love, Belmondo is his usual macho but charming self and he oozes coolness throughout the film.

The film is filled with snappy dialogue, interesting set pieces, solid action and a surprising amount of laugh out loud humor. Some may find that the humor does'nt gel with the storyline perfectly but I thought it added a nice touch to the film. I don't think action thrillers have to be deadly serious to work, and The Professional is a prime example of this.

Belmondo is famous for doing all his own stunts, and so is the case in this film, he does everything himself which increases the believability factor greatly, including when he does his own stunt driving during a nifty car chase.

The cast is filled with excellent French character actors including the always sinister Robert Hossein as Belmondo's main adversary. The score by Ennio Morricone is one of his best, including his famous "Chi Mai" theme.

The Professional was just released on DVD by VCI and the film looks magnificent, the print and transfer they used were perfect, the film looks like it was shot yesterday even though it was made in 1981. The only extra is the trailer for the film, but I was still happy with the a/v quality of this film. I hope VCI releases more Belmondo films in the future.

In some ways the The Professional reminded me a bit of the Bourne Identity storyline, except this film was a lot more entertaining, and Jean-Paul Belmondo could beat the snot out of Matt Damon in his sleep. The film harkens back to another time when films weren't concerned with being politically correct, they just wanted to entertain, and boy does this film entertain. Action, suspense, lovely ladies, humor and a totally kickass macho main actor in Jean-Paul Belmondo make this a must see film for anyone that enjoys a fine action thriller.

Mereie d
October 14, 2009
I find "Le Professionnel" is beginning to grow on me. I just saw it for the third time, having recorded it for my film collection. I did so too when I saw it the second time, but then decided it wasn't good enough. But for some reason, I keep feeling the need to see it again. True, the story is quite flimsy, and the African part is slightly too long, but this film does a good job painting certain pictures - political pictures mainly. The politicians and their dirty games are depicted very accurately, as are the African officials and the circumstances in their country. This movie is not funny at all, but Belmondo still gets a chance to indulge in some of his prankster acts and stunt work. And Robert Hossein is magnificent as the sadistic scumbag cop Rosen (I rather feel HE is beginning to grow on me ... ). Just imagine he's the same actor who played the Jeoffrey de Peyrac role in the Angelique films! Perhaps I should watch this movie again. Maybe I could rate it even better then. One tiny point of criticism concerning the musical score: why did Ennio Morricone use this kind of romantic music in a corruption/action thriller?

Deadly V
October 5, 2009
One of my favorite action thrillers of all time which also happens to feature one of the coolest soundtracks ever.