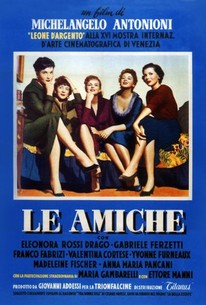 Roman couturier Clelia (Eleonora Rossi-Drago) leaves the big city to work at a boutique in Turin. She moves into a hotel and makes several new friends, but is soon drawn into their extremely unpleasant lives. Clelia enters a doomed relationship with a poor architect's assistant (Ettore Manni), sees her new best friend Rosetta (Madeleine Fischer) commit suicide after being jilted by her married lover (Gabriele Ferzetti), and is eventually fired from her new job when her hysteria over Rosetta's death interferes with her work. Clelia finally goes back to Rome, and viewers will not blame her a bit. Le Amiche, based on a 1949 article published in La Bella Estate ("Tre Donne Sole" by Cesare Pavese), is perhaps Michelangelo Antonioni's first great film. Juggling 10 characters with great aplomb, Antonioni and co-screenwriters Suso Cecchi D'Amico and Alba De Cespedes have created a rich, interlocking narrative which manages to rise above mere melodrama through careful attention to the ebb and flow of interpersonal relationships and a keen sense of balance. The fine supporting cast includes Valentina Cortese, Yvonne Furneaux, and Franco Fabrizi.

Antonioni turns a glossy romantic melodrama of modern prosperity inside out to reveal the essence of modernity itself.

Antonioni's ability to use the screen's illusion of depth or the way he lends an eloquence to the space between characters is a marvel. How he has these people stand is so much more expressive than anything they say.

Long before the he put Monica Vitti through the existentialist-ennui wringer, Michelangelo Antonioni gave the world this muted melodrama about urban females dealing with boorish men, banal modern life and the occasional suicide attempt.

An Antonioni film will frequently pose a riddle, and then never answer it; here the mystery of why Rosetta tries to kill herself becomes a pretense for the rest of the film.

Redeemed by Antonioni's talent for episodes: the dismal picnic, the row in the restaurant, redecorating the apartment; and by his clever cutting and photography for character.

Lovers of the great Italian filmmaker Michelangelo Antonioni have cause to rejoice with this new-print revival of his best pre-L'avventura feature.

plays like the haunting island-search centerpiece in L'Avventura in gestation

Based on Cesare Pavese's novella, this film examines the complex interplay and emotional intensity of relations between a bourgeois group of women. The pervasive cynicism within the novella is concentrated in Momina's character. The film also emphasizes the burgeoning and evolving role of the independent woman. This early work shows the development of Antonioni's unique framing and narration methods, particularly in the beach scene. It's rare to have an ensemble cast deliver such strong performances!