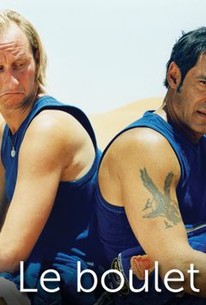 French filmmakers Alain Berberian and Frédéric Forestier direct the buddy action comedy Le Boulet (Dead Weight). Tough criminal Moltes (Gérard Lanvin) lands in jail after killing the brother of the Turk (José Garcia). Prison guard Reggio (Benoît Poelvoorde) lets Moltes have a weekly lottery ticket in exchange for his suave relationship advice. When Moltes learns that he has a winning lottery ticket, he breaks out of jail to claim his money. However, Reggio's girlfriend, Pauline (Rossy de Palma), has the ticket with her in Africa. The action involves the odd couple teaming up to find the ticket while being chased by Det. Youssouf (Djimon Hounsou), along with the vengeful Turk and the Giant (Gary Tiplady).

José Garcia
as The Turk

Gary Tiplady
as The Giant

There are no featured reviews for Le Boulet at this time.