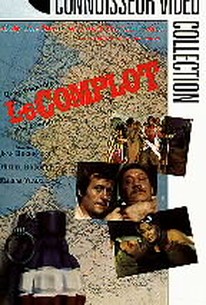 Le Complot is based on a true spy story of double-, triple- and quadruple-cross. The plot is galvanized by Charles DeGaulle's decision to pull French troops out of Algeria. The central characters include a group of pro-Gaullists, a gang of left-wing insurgents, and the police. It all sounds a great deal like The Battle of Algiers, but there are enough nuances to sustain the suspense. The film's 120 minutes hold up well--though you may not get all 120 minutes on commercial TV, due to the film's "R" rating. Complot is also known by the English-language title The Conspiracy. ~ Hal Erickson, Rovi

Robert Castel
as Man
View All

There are no critic reviews yet for Le Complot. Keep checking Rotten Tomatoes for updates!

There are no featured reviews for Le Complot at this time.