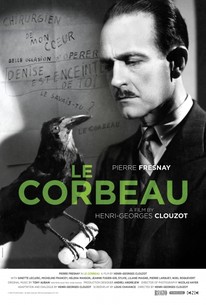 The drama is set in a French village where some nasty soul has been causing a local uproar by sending poison pen letters to prominent citizens. The prime target is the local doctor with the mysterious past; as the town paranoia increases, it is he who becomes the prime suspect, but in the end, the real culprit, the is revealed. He is the last person any one would have suspected.

Pierre Bertin
as The Sub-Prefect

Roger Blin
as Francois, the cancer patient
View All

Clouzot, always a painstaking filmmaker, has constructed a plot of fiendish intricacy whose wild twists implicate one character after another until justice is finally served.

The movie squirms with mistrust, and burrows deep.

This exposé of a malicious small town in France must be one of the most depressed films to emerge from the period of the German Occupation.

Clouzot, often called the French Hitchcock, is not just a master of suspense but is also most adroit at implicating his audience.

Clouzot builds a argument as sharp as a razor, dark, tense, prone to enunciating themes such as adultery, prejudice and slander. [Full review in Spanish]

Although the story gets a little out of hand in the end, this film possesses a good share of the qualities we seek from a French producer... a tender regard for detail, perfect casting, and simple but thoughtful photography.

Recognized now as an early classic of film noir, it was Clouzot's masterpiece of psychological suspense, misinterpreted and reviled by all political viewpoints at the time.

an involving mystery, a bitter portrait of a community at odds with itself and, with its unlikeable characters, stark use of shadows and pessimistic moral outlook, an exemplary forerunner to the whole genre of film noir.

Very shrewdly designed to work as a mystery thriller -- complete with red herrings -- and it undeniably holds the viewer's interest throughout with the mystery.

A searching light on humanity's warts and pockmarks

An absorbing thriller that surprises us with the way its mystery becomes always more gripping and with its pessimistic view of mankind and the rottenness hidden inside all of us - and it came out in a perfect time for that sort of discussion during the German occupation of France.

I thought it was boring..

This was quite a spooky flick. The mystery keeps you guessing even after the movie is over, if you know what I mean. Nevertheless, it's quite entertaining. A little bit of editing would have made it even better.

one of the most controversial films of all time, clouzot could have lost his career for some of this films undertones were it not for support from philosophers and other film makers with some influence. the film is marvelous, tangling a very interesting web of sub plots and philosophies into a thriller that delivers incredible suspense despite the fact the chaos was delivered more through menacing words than acts of violence. i thought i had the culprit, infamously dubbed "the raven", pegged early on, but clouzot through me a few solid curve balls in the end to leave me doubting until the reveal, which i got wrong. a great thriller and a must see from early french cinema.